An ingenious free kick from new playmaker Bruno Fernandes allowed Anthony Martial to fire home the game's opening goal in the first half.Second-half substitute Scott McTominay pounced on some poor distribution from City goalkeeper Ederson in the game's final seconds to ensure the bragging rights stayed in the red half of Manchester.Defeat means City falls even further behind Liverpool at the top of table, with the Premier League trophy almost inevitably on its way to Anfield for the first time in 30 years. City are now 25 points behind Liverpool.Meanwhile, United moves up to fifth, just three points off Chelsea and the automatic Champions League places. READ: Confusion as sports minister calls for Serie A suspension amid coronavirus outbreak

As has often been the case since his arrival from Sporting Lisbon in January, Fernandes was in great form and looked a constant threat throughout the match.It was his quick thinking that released Martial for the first goal, clipping a free kick to the Frenchman whilst the rest of the stadium expected a cross into the box. "I've seen him to do it before," United boss Ole Gunnar Solskjaer told Sky Sports after the match.As the rain poured down at Old Trafford, United fans were busy celebrating their third win over their city rivals this season. It was the first time in a decade that Manchester United had completed a league double over the blue half of Manchester. The result is yet another sign that things are beginning to look brighter at Old Trafford, with the side now without a loss in 10 matches — winning seven and drawing three. In truth, Pep Guardiola's side were uncharacteristically sloppy in possession and were too often second best to their hungry hosts. Guardiola, who had praised his rivals for their aggression ahead of the highly anticipated derby, cut a frustrated figure on the sidelines. In stark comparison, his opposite number was beaming when the referee blew the final whistle, having watched his side execute his counterattacking plan to a tee. "The desire, attitude, commitment, connection between fans and players pleased me most," Solskjaer said."It is a privilege to be a manager of a squad with this attitude. You can't ask for more. They are going to improve as players as well."READ: Soccer clash in Germany draws full stadium, despite nearby coronavirus outbreak 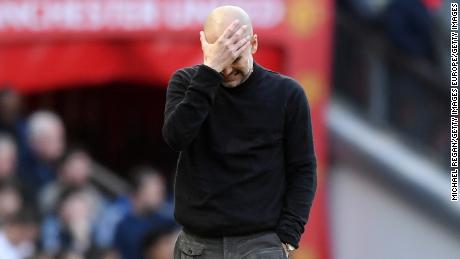