With the tie level at the end of the 90 minutes thanks to Georginio Wijnaldum's header, Roberto Firmino looked to have scored the tie-winning goal just four minutes into extra time.But two goals from substitute Marcos Llorente in the space of eight minutes, the first courtesy of a howler from stand-in keeper Adrian, drew the sides level on the night and gave Atletico the lead on aggregate.Anfield was stunned into total silence as coach Jurgen Klopp looked bemused on the touchline, arms held out disbelievingly.Alvaro Morata scored the third in the final few seconds to secure a memorable 4-2 aggregate win for Atletico.This stadium had been the site of one of the greatest ever Champions League comebacks last season, as Liverpool overturned a 3-0 first-leg deficit against Barcelona to reach the final.Tonight, it's the site of one of Liverpool's most painful European defeats.READ: Thrilling RB Leipzig runs riot to dump Jose Mourinho and Tottenham out of the Champions LeagueREAD: How do you beat high-flying Liverpool? Watford's Christian Kabasele reveals all

There would have been more than a few hearts in mouths inside the opening 20 seconds at Anfield, as Joao Felix's slick turn and pass set Diego Costa through on goal.The Spanish striker, a familiar foe for Liverpool from his time at Chelsea, could only skew his shot into the side netting but it was an early reminder for Liverpool of the quality that Atletico Madrid possesses going forward.Costa was soon slipping into his preferred role of pantomime villain, petulantly throwing the ball away as Liverpool goalkeeper Adrian attempted to take a quick free-kick.It was a tactic Atletico had been expected to employ in an attempt to frustrate both the Liverpool fans and players into submission and reduce the game to a scrappy affair.They succeeded in doing exactly that but Liverpool was giving as good as it was getting, ferociously snapping into tackles with From the outset, Anfield wasn't quite at its famous levels of noise — perhaps the torrential rain had dampened the atmosphere somewhat — but Wijnaldum's stinging strike, palmed away brilliantly by Jan Oblak, was enough to spark the crowd into life. 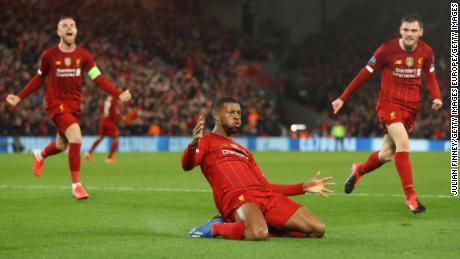 As had been expected, Liverpool dominated possession inside the opening 30 minutes but, Wijnaldum's effort aside, hadn't troubled Atletico's back line.Diego Simeone's side is widely considered the best defensive unit in European football and as Liverpool's attacks were repelled again and again, it sometimes felt as though it was crossing balls into a brick wall.But Liverpool's pressure eventually started to tell and a few of those bricks started coming loose; Wijnaldum once again tested Oblak before he eventually found a way through.Alex Oxlade-Chamberlain's cross found the Dutchman totally unmarked in the middle of the penalty area and he directed his header down into the wet turf and into the top corner.Wijnaldum is making a habit of scoring big goals for Liverpool in the Champions League; last season, he scored a brace to haul Liverpool level in that famous semifinal comeback win against Barcelona.Anfield roared into life and Atletico's players spent the remaining two minutes of the first half desperately waiting for the half-time whistle to blow.

Backs to the wall

Those 15 minutes respite changed very little and Atleti's players were back out in the second half and immediately had their backs to the wall.Again they had Oblak to thank for keeping them level in the tie, as the Slovenian stopper did brilliantly to save efforts from Oxlande-Chamberlain and Roberto Firmino. But midway through the second half, Liverpool was given a sharp warning of how quickly this tie could change.Felix, Atletico's $142 million star signing, managed to wriggle free on the edge of the area and his deflected effort brought an awkward save out of Adrian.Liverpool's stand-in keeper should have dealt with the effort comfortably but presented Angel Correa with an opportunity from his weak parry, though he did eventually manage to smother the ball.With little more than 20 minutes remaining, the whole of Anfield thought Liverpool had found the tie-winniRead More – Source