It was the culmination of an almost surreal series of events that have seen the 21-year-old Odegaard become arguably Real's best midfielder this season without even playing for the club.Despite having the option to and "seriously considering it," according to Spanish newspapers, Real then opted against bringing Odegaard back from his loan at Sociedad during the January transfer window.After signing for the Spanish giant in 2015 aged just 16, Odegaard drifted into relative obscurity but has rebuilt his career with two loan spells in the Netherlands and now with Sociedad in La Liga.And this season has finally seen the 21-year-old come of age following a series of commanding performances in midfield for the Basque club, his silky movement and range of passing causing opposition teams headaches week in, week out.READ: Barcelona is in crisis. Will Lionel Messi leave?The end product is there now, too, with Odegaard contributing six goals and five assists already this season to help Sociedad climb to eighth in La Liga and now reach the semifinals of the Copa del Rey.It's fair to say that Odegaard is showing more than a few signs of the promise that convinced Real Madrid to part with $9.5 million for him in 2015.READ: The rise and rise of Martin Odegaard

'Kings of the Cup'

Odegaard wasn't the only Scandinavian youngster showcasing his precocious talents at the Bernabeu on Thursday.Swede Alexander Isak, just 20 years old, scored two goals and assisted another to ensure the Copa del Rey is the one trophy Zinedine Zidane still hasn't won in his two spells as Real manager.In many ways, Isak's career trajectory has mirrored Odegaard's; signed from his hometown club at a young age and for a lot of money by a European giant — in his case Borussia Dortmund — before failing to impress and ending up at Sociedad.Similarly, Isak has found a comfortable home since signing for the Basque club permanently this season and has fired 14 goals already, including seven in his last five matches. 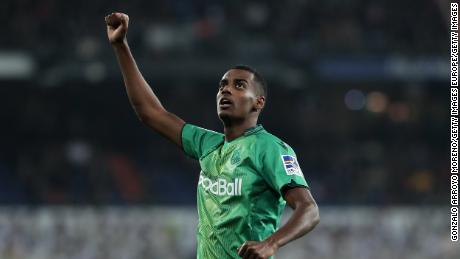 "Superhero Isak," was one headline in Madrid-based newspaper Marca. "With his two goals and one assists, the Swede was the main architect of the path to the semifinals."Read More – Source