Odion Ighalo's deadline day loan from Shanghai Shenhua to the Premier League club was one of the biggest surprises of the January transfer window — and the move has made waves back in his home country, Nigeria.The 30-year-old already has Premier League experience, appearing 99 times for Watford between 2014 and 2017, but the reaction back home to Ighalo's signing shows the worldwide global appeal an ailing Manchester United still possesses."It was crazy because all over the news for the last few days is about my deal to Man United," Ighalo told the club's website. "Even the street I grew up on, they are doing parties, celebrating Ighalo signing for United. "They sent me the video, I was just laughing and happy because many of them are supporting Man United and some of them are supporting some other teams in the Premier League. "But they said, because of me, they are moving to United because they have a very big fan-base in Nigeria. So I am happy about all this and they are rooting for United from now on." 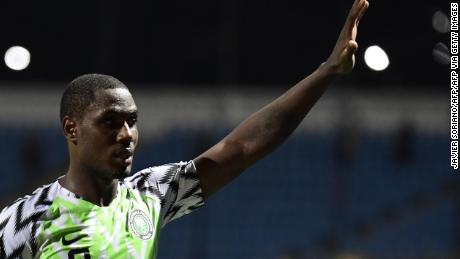 READ: Barcelona in crisis after Lionel Messi lashes out at club's hierarchyREAD: Racism in football is 'bubbling up again,' says UK anti-racism headWhen Ighalo steps onto the pitch to make his Manchester United debut he will make history as the first Nigerian to play for the club.Many saw the last-ditch signing as a sign of desperation from Manchester United, which is without star striker Marcus Rashford until the end of the month through injury, as Ole Gunnar Solskjaer hopes to lead the club to a Champions League place.But Ighalo's impressive record of 39 goals in 99 games for Watford means he won't be listening to the naysayers and will wear the red shirt with pride. "I'm really proud. I'm happy because people keep sending me messages: 'I know that this is very big, you're going to be the first Nigerian to play for United, it's a good record for you in your career.'"I know that after you finish football, you are going to know what we are talking about, because I'm just so emotional right now, so I don't think about those things too much. I just want to get started and get playing and start helping the team to do well."

As has seemingly become customary when a media trained player signs for a club, he often tells his new employers that it has always been his "dream" to play for them.However, for Ighalo that is genuinely the case.He gave his agent instructions to do whatever it would take to ensure he could sign for United."I'm very happy. First, I want say thank God for making this happen and it's just like a dream come true for me because I know many people used to say wheRead More – Source