Barcelona's many defensive frailties were laid bare once again at a raucous Benito Villamarin — and once again it was Messi who dug his team out of a hole as the visitors won 3-2 in Seville.His pinpoint pass onto Frenkie De Jong's chest and free-kick into the box for Sergio Busquets twice canceled out Betis' lead in an enthralling first half, before Clement Lenglet headed home the winner from another Messi cross in the second half.Both sides finished the game with 10 men, with Nabil Fekir dismissed on 76 minutes and Lenglet shown a red card soon after.

If there's one thing Quique Setien's team can never be accused of it's being boring.In the seven games since the former Real Betis coach has taken charge of Barca, his side has conceded seven goals and kept just two clean sheets, but scored 13 in the process.The hectic style of play under Setien — often chaotic but always thrilling — is a stark contrast to that of former coach Ernesto Valverde, whose more methodical approach didn't sit well with many fans.Spanish newspaper Marca called the victory over Betis, which could have just as easily ended in defeat, "pure Setienismo.""Discontrol, that is the DNA of Setien's team this season. Zero defensive reliability and sparks up front with Messi as a fire extinguisher. Crazy."Messi as a firefighter is an apt analogy for Barcelona this season, or perhaps the past five seasons, putting out the flames caused by a haphazard recruitment and underperforming teammates.But there are only so many shortcomings that even Messi, regarded by many as the greatest of all time, can make up for."Stopping the breakdowns in defense, Setien's first great challenge," wrote Barcelona-based newspaper Sport. "The team makes lots of errors and concedes too much space to its opponents."Beyond (Nabil) Fekir's great match, the feeling of impotence to stop him was obvious and worrying."READ: What next for Lionel Messi after the Instagram post that rocked Barcelona?READ: Barcelona in crisis after Lionel Messi lashes out at club's hierarchy

Setien received a warm welcome on his return to Betis, the club he left in 2019 following an up and down two year-spell with the club.Much of the brilliance and frustration that has come to define him as a coach and his time in charge at Betis was on display for Barcelona, which makes his assessment of the match unsurprising."I really liked the team," he told reporters after the game. "You have to put things into perspective, there are things we could have done better but I'm happy. We twice overturned an adverse scoreline. 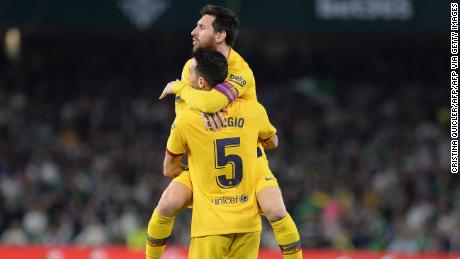 "The team is improving in many things and I am very happy with the performance, the result and everything else."MRead More – Source