The 28-year-old had to push away his own teammates as he tried to leave the field during his side's match against Vitoria de Guimaraes Sunday.Sport TV reporter Ivo Costa, who was at the game, told CNN that monkey chants were clearly audible throughout the game. The forward put his middle fingers up at the crowd and gestured with his thumbs down as he was eventually substituted amid a chorus of jeers. "Normally if a player in your team is getting kicked, you help him," Gullit told CNN Sport's Alex Thomas, ahead of the 2020 Laureus World Sports Awards in Berlin."Here, there was no help from his teammates who tried to persuade him to stay. They should have made a stand."READ: La Liga rethinks stance over apparent racist gesture by Real Mallorca coach
READ: Porto forward Moussa Marega walks off pitch after suffering racist abuse

'This is not what we tolerate'

Otávio Monteiro was one of multiple players trying to hold back his teammate but, in an Instagram story posted after the match, Marega said his "brother" was just trying to calm him down.In addition, Otávio posted an Instagram message in support of Marega.Porto also released a club statement in solidarity with its player and said it would continue to fight against racism. Portuguese Prime Minister António Costa also tweeted his support for the striker.However, former Netherlands midfielder Gullit — who won two European Cups during an illustrious career — also called for the opposition to do more in such situations. "This is not what we tolerate in our sport because it affects you as well. Not only the player but it affects you. So you have to stand up together," added the former Chelsea and AC Milan star. "The opposition should say, 'this is ridiculous, we don't take that anymore.' "This is not part of football, not supposed to be part of football and you have to get these people out of the stadium." After the game, Vitoria de Guimaraes said in a statement the club opposed all forms of racism and promised to work with the judicial bodies to act "firmly and consequently."
READ: Football fans in Germany chant 'Nazis out' as racist fan is identified and ejected 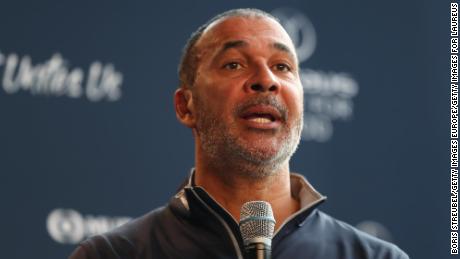