The French Open is one of the most historic competitions in the world, but the clay court venue has been brought bang up to date with the addition of a retractable roof. The structure covers Roland Garros' main stage, the Philippe-Chatrier court, in a bid to rid the biggest matches of those pesky rain delays. The roof, which will take approximately 15 minutes to close, is made up of 11 individual trusses — each weighing 330 metric tons — and took eight months to assemble, according to organizers. READ: Margaret Court criticizes John McEnroe and Martina Navratilova over protest
READ: Djokovic says tough upbringing in Serbia made him 'hungrier for success' 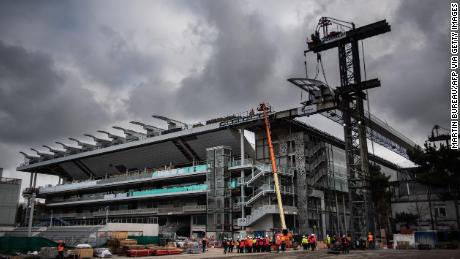 The individual components were made in workshops near Venice over a period of two years and will cover a surface area of one hectare in total. The French stop of the tennis tour is the last major to fit a retractable roof to join Wimbledon, the Australian Open and the US Open.