This is a club that has not won the league title for 30 years and, even with a 13-point lead at the top of the table before Sunday's match against Manchester United, there was a sense the nervous fan base still didn't want to risk jinxing things.But once Mo Salah's late strike secured a 2-0 win over Manchester United, you got the feeling the party to end a three-decade wait for the title had just begun.Even the most pessimistic of Liverpool fans and optimistic of Manchester City fans will probably now admit this season's Premier League title race is over.After Pep Guardiola's side could only muster a disappointing draw against Crystal Palace on Saturday, Jurgen Klopp's Reds have now extended their lead at the top of the table to 16 points.While the scoreline alone makes this game seem like a somewhat tight affair, it was anything but.READ: Relentless Liverpool on course for record-breaking seasonREAD: Liverpool make best-ever start to a Premier League seasonUnder a brilliant red sky at Anfield, the gulf in quality between these two teams was plain for everyone to see and victory for Liverpool means the club is now 30 points better off than Manchester United this season.After today's match, you were left wondering how it was only 30.Aside from a brief spell on pressure early in the second half, Manchester United had no answer to the relentless red wave that descended time and again on its goal.When Virgil van Dijk opened the scoring for Liverpool after just 14 minutes — towering above everybody in the box to head home Trent Alexander-Arnold's corner — the only surprise was that it had taken that long.Curiously, Manchester United is the only team this season to have taken points off Liverpool in the Premier League, holding the champion-elect to a 1-1 draw back in October. 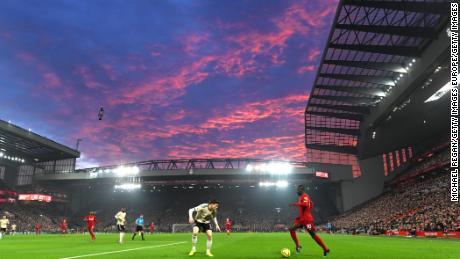 As the first half wore on, the visiting side's defense continued to wilt under pressure and Liverpool found VAR to be a far more stubborn opponent than United's backline.Not once, but twice was the home side denied by the video assistant referee; the first for Van Dijk's foul on David de Gea and the second for a fractional offside decision.Liverpool was cruising at half time, though if any particularly jittery fans did need some extra comforting, the Reds hadn't lost a home Premier League game when leading at the interval for 10 years, a run stretching back 102 matches.Two minutes into the second half, Salah Read More – Source