In a rare major semifinal devoid of any of the "Big Three," Thiem recovered from an early wobble to down "Next Generation" star Alexander Zverev of Germany 3-6 6-4 7-6 (7-3) 7-6 (7-4).Sunday's showdown against Novak Djokovic will be Thiem's third grand slam final appearance. Visit CNN.com/sport for more news, videos and featuresFor the casual fan, not having Roger Federer or Rafael Nadal — Thiem downed the Spanish world No. 1 in a physical four-hour contest Wednesday — in the last four lessened the star power on display in Melbourne. But the events that unfolded on the aqua blue hard courts certainly made for an unforgettable evening, which came after daytime temperatures exceeded 40 degrees Celsius. "It was an unreal match," said Thiem. "Again, two tiebreaks, so tough and so close."It was almost impossible to break him — he had such a high percentage on his first serve."But (to reach) the Australian Open final is unreal, what a start to the season."The contest had to be halted briefly due to showers — the roof was utilized and never reopened — and Zverev struck one of the shots of the fortnight when his forehand off Thiem's smash zinged past him in an absorbing final game of the second set. As some of the lights on Rod Laver Arena subsequently went out early in the third, world No. 5 Thiem dived in the style of Boris Becker to strike a volley and Zverev incredibly seemed to ask his opponent to give him a point when a serve that he thought was an ace was called wide at 4-4 in the third. He'd run out of challenges.READ: Novak Djokovic defeats Roger Federer to reach eighth Australian Open finalAs if that wasn't enough, seventh-ranked Zverev received a warning for a potty mouth when he held serve in that game and Thiem almost completely rolled his ankle after rifling a forehand winner down the line. Thiem also appeared unwell at one stage, gesturing to his camp that he had to vomit.Amidst all that, Thiem saved two set points at 4-5 in the third with flashy winners after crucially fending off one against Nadal in their opening set. 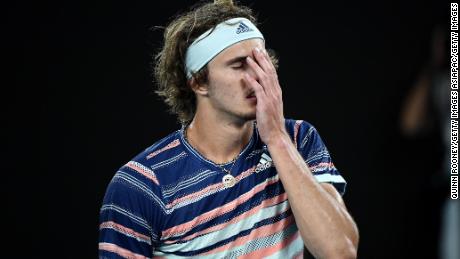 Trailing by two sets to one was bound to annoy the 22-year-old Zverev, given he had let his 26-year-old rival off the hook in the second. Drawing level at 3-3 with a break of serve, Zverev was subsequently broken for 3-4. Thiem was helped by a net-cord winner after benefiting from kind net cords, too, against Nadal. READ: Sofia Kenin ends 'Barty Party' at Australian Open to reach finalBut Thiem relies on more than luck to win. He is one of the game's biggest hitters who refuses to back down under pressure. Even before saving the two set points in the third, he brushed aside two break points in the last game of the second by tallying one of his 43 winners and forcing an error. Overall, Thiem went 4-for-9 on break points, with Zverev 5-for-14. "I had 14 break points. That should be plenty," said Zverev. "In the important moments, I didn't play my best. He did. That's where the match kind of went his way."Tiebreaks were a charm for Thiem against Nadal — winning all three — and unfortunately for Zverev, nothing changed. Thiem raced to a 3-0 lead in the edgy fourth-set tiebreak, only to let Zverev back in it by missing two shots in succession. Zverev, however, erred on a smash to make it 4-2. Even the lines people were getting tense, Zverev's ball on the baseline called long. The point was replayed with Thiem taking advantage by lashing a forehand winner.Moments later, Thiem officially improved to 7-2 against Zverev when his short forehand volley left his foe with no chance. How mom Karin, watching from his box, must have been proud. Mom might be visiting the tattoo parlor soon, ever since last year she vowed to get a tattoo for every tournament her son wins.Thiem suggested that a kangaroo was the obvious choice of design. 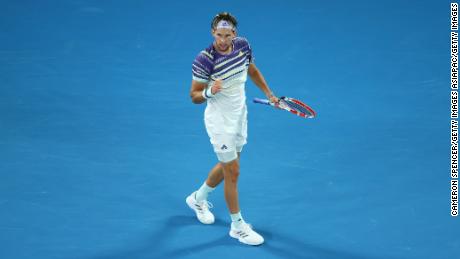 But Thiem won't be the favorite against Djokovic, even after winning their last two matches at the ATP Finals and French Open last season. The Serb is the King of Melbourne having claimed seven titles and Thiem knows it. "I won I think more of the last encounters than he did but I think it doesn't count so much," said Thiem. "It'sRead More – Source