The city has been affected by the widespread bushfires that have ravaged the country and organizers have come in for heavy criticism from players for allowing the qualifying rounds to go ahead with Melbourne enveloped by smoke haze."There is a lot of speculation about the Australian Open not happening, or starting later," Tiley told reporters. "The Australian Open is happening."Earlier this week, Slovenia's Dalila Jakupovic was forced to quit her qualifying match while she was leading after succumbing to a coughing fit brought on by the bush fire smoke.British player Liam Broady also criticized tournament organizers, calling an email which declared that conditions were "playable" and "healthy" a "slap in the face."Jakupovic and Broady both played their matches on the same day the Environment Protection Authority for Victoria warned residents of Melbourne to stay indoors, keep windows and doors shut and keep their pets inside.READ: Dalila Jakupovic hits out at Australian Open organizers after bushfire smoke forces her to quitREAD: Liam Broady brands Australian Open email a 'slap in the face'"Air quality is a very complex and confusing issue which relates to a number of different factors," Tiley said. "There are number of different air quality measures and it is made more complex by going on an app. There are different apps and websites which give you different readings."This is about trusting the medical advice and trusting the expertise and scientific advice of the people who analyze this every day. The safety, the wellbeing and the health of the players is the priority for us, as with our staff and our fans."Tiley says tournament organizers are using a specific type of air quality measure called PM2.5 and any reading in excess of 200 would be deemed unsafe for players. 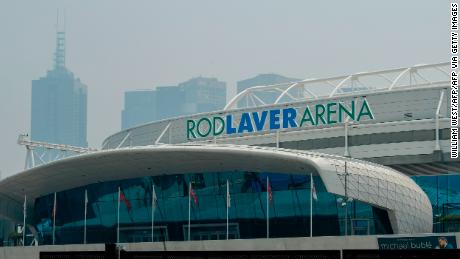 READ: Rafael Nadal teams up with firefighter and Coco Gauff faces 3 vs 1 in Rally for ReliRead More – Source