Caroline Wozniacki announced last year that she would end her playing days in Melbourne at the age of 29. The Dane's 7-5 3-6 7-5 defeat by Tunisia's Ons Jabeur called time on a glittering career defined by gritty determination.Visit CNN.com/sport for more news, videos and features"I had a dream when I was a kid," said Wozniacki. "I wanted to win a grand slam, I wanted to be No. 1 in the world. "People thought that I was crazy being from a small country, but I made it happen. I worked so hard for it every single day. I'm very, very proud of that."READ: Serena knocked out by Qiang WangWozniacki's sole grand slam title came in Melbourne two years ago when she defeated Simona Halep in three sets. Some would argue she deserved more major silverware having won 30 singles titles and closed out the year on top of the world rankings on four occasions.But despite hanging up her racket at the age of 29 — during a time when the likes of Williams and Roger Federer are playing deep into their 30s — Wozniacki said she had no regrets about the decision, nor that she was felt she was walking away wanting more. READ: Coco Gauff stuns defending champion Naomi Osaka

"Any professional tennis player knows how hard it is to get to the top and knows how hard it is to stay at the top," she said."One day you look at yourself and I say, 'I'm ready, I'm ready for a next chapter, I'm ready to do something else, I'm ready to not have a schedule and pushing myself to the limits every single day'. "There's so much that tennis has given me, I've learnt so much and I'm so thankful, but I think life outside of tennis will be equally as exciting. "I don't think it's goodbye forever, you'll still see me around tournaments sometimes, not on the court but maybe doing something off court. I'm excited to see what the next chapter brings."In 2018, Wozniacki was diagnosed with rheumatoid arthritis — a disease that limits mobility through painful joint inflammation and stiffness — but said in her retirement announcement in December the decision to step away from tennis was unconnected to her health. At the time, she explained how getting married to former NBA player David Lee last year had shifted her perspective and that she plans to "start a family with him while continuing to travel the world and helping raise awareness about rheumatoid arthritis". 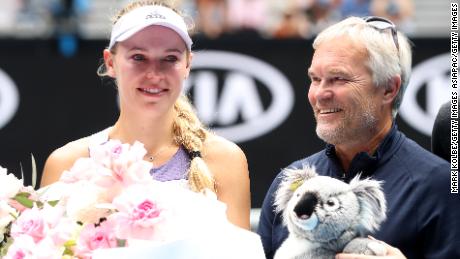 Williams, who also exited the Australian Open in the third round with defeat by China's Wang Qiang, reflected emotionally on seeing one of her closest friends retire from the sport. "She's had an amazing career — oh my god, I'm getting emotional," Williams told reporters. "I'm going to miss her Read More – Source