The world No. 30 defeated Germany's Jan-Lennard Struff 6-4 7-6 in Brisbane days after he had kickstarted tennis' efforts to support wildfire victims. Kyrgios tweeted Tennis Australia on Wednesday urging the organization to raise funds by scheduling an exhibition match. He then pledged $200 (140 USD) to relief efforts for every ace he hits at upcoming tournaments."I don't really care about the praise too much, I just think we've got the ability and the platform to do something like that," said Kyrgios, who slammed 20 aces — totaling a donation of $4,000 (2,775 USD) — against Struff."Obviously my hometown's Canberra and we've got the most toxic air in the world at the moment. It's pretty sad. It's tough."It's tough to go out there and concentrate on tennis, to be honest. Every ace I was hitting that's all I was thinking about. Every time I stepped up to the line that's all I was thinking about."Visit CNN.com/sport for more news, videos and featuresNaval and air rescue operations were launched Friday as blazes intensified, leaving residents and tourists stranded in towns that risked being engulfed by flames. A total of 18 people have been killed this fire season, and across the state of New South Wales, 1,365 homes have been destroyed and more than 500 damaged.Tennis Australia has pledged $1 million (700,000 USD) towards the repair of tennis facilities damaged by the fires, and the organization will also donate $100 (70 USD) for every ace hit at the ATP Cup.Since Kyrgios' initial offer, numerous other players have offered up their aces to relief efforts, including compatriots Alex de Minaur, John Millman and Samantha Stosur who are chipping in with donations of $250 (175 USD), $100 (70 USD) and $200 (140 USD) respectively. As part of its support, Tennis Australia will also hold a Rally for Relief exhibition match at Melbourne Park's Rod Laver Arena on January 15.READ: Australian tennis stars show support for bushfire victims 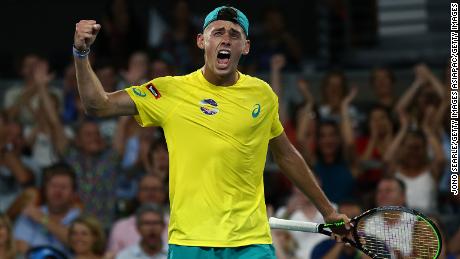 The names of participants are yet to be confirmed, but the Sydney Morning Herald reported that Roger Federer, Rafa Nadal and Novak Djokovic could all feature. "It is heartbreaking to see the devastation the bushfires are wreaking across the country and to see so many people and communities suffering," said Tennis Australia boss Craig Tiley."We are working closely with the top players and have already had a great response, with many of them keen to help this incredibly important cause."We look forward to providing an evening of great tennis and entertainment to raise as much money as we can for bushfire relief."READ: Margaret Court claims LGBTQ teaching in schools is controlled by 'the devil'The ATP Cup, which hosts teams from 24 countries across three Australian cities his week and next, expects to donate $150,000 (105,000 USD) from aces hit over the course of the tournament.The bushfires have also forced the Canberra International, one of the tournaments that forms part of the build-up to the Australian Open, to be moved to a new location.Read More – Source