The former world No. 1 was granted wildcard entry to the Australian Open but went down 6-3 6-4 to Croatia's Donna Vekic off the back of an injury-ravaged 2019. Sharapova will fall out of the top 350 when the latest world rankings are released after the tournament, admitting she wasn't sure whether she would play in Melbourne again."It's tough for me to tell what's going to happen in 12 months' time," said Sharapova, who won her only Australian Open title in 2008."I was fortunate to get myself to be here and thankful to (Tennis Australia boss) Craig (Tiley) and the team for allowing me to be part of this event."Visit CNN.com/sport for more news, videos and featuresIn terms of her 2020 schedule, the 32-year-old remains unsure. "I don't have a crystal ball to tell you if I can or if I will (play the number of tournaments I'd like), but I would love to, yeah," she added."It's tough to say I'm on the right track right now 45 minutes after the match. But there is no way to get out of it except to keep believing in yourself, because if you do all the right things and you don't believe in yourself, then that's probably a bad formula."READ: Rafa Nadal breezes through Australian Open first roundREAD: Frenchman hits back at critics over ball girl banana dramaIn a topsy-turvy encounter, Sharapova slipped to an early 5-1 deficit in the first set against Vekic. She recovered with a break of serve, before ceding 6-3.Sharapova held a 4-1 lead in the second but lost the remaining five games of match. She ended with 31 unforced errors to Vekic's 17. 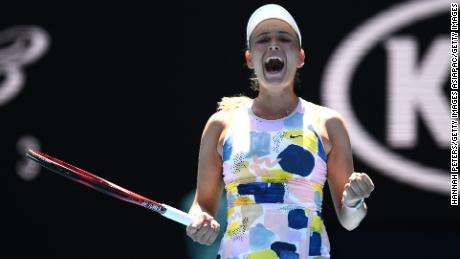 The Russian hasn't won back-to-back matches since last year's Australian Open, where she reached the fourth round. A shoulder injury forced her to withdraw from the French Open, while a forearm injury saw her retire in the first round at Wimbledon, despite leading Pauline Parmentier by a set and a break. At the US Open, she was bettered by longtime rival Serena Williams in the first round and fell to a year-end ranking of 136, her lowest since 2002.In 2016, Sharapova Read More – Source