Liverpool has twice won the Champions League since 1990, but that league title has proved elusive, though Liverpool came very close to winning the Premier League in 2014, before Manchester City took the honors.Visit CNN.com for more news, videos and featuresSo the message from manager Jurgen Klopp and his players is to only think about the next match."We try just to stay focused on the next game and do our best on the pitch," Liverpool goalkeeper Alisson Becker told the club website on Monday following the Reds' 1-0 away win at Tottenham Hotspur. Manchester City might have beaten Aston Villa 6-1 on Sunday, but the Premier League champion remains 14 points behind Liverpool, with the current leaders having played one less game.READ: Liverpool makes best-ever start to a Premier League season"We celebrate this victory then we have some days off to rest and have time with family," added Alisson."But when we are back in training, we need to be really focused on the next game, which is an important game for us in the continuity of the race for the title. We are doing really well so far, as the boss always says, we are being the best so far and we need only to keep going, keep pushing and do our best."Saturday's win at Spurs ensured that Liverpool has now made the best start to a season in the history of the Premier League. Klopp's side has notched up 61 points from its first 21 games to surpass Manchester City's record of 59 points set during its title-winning 2017-2018 season. Liverpool's start also is the most successful in Europe's big five soccer leagues.Jurgen Klopp's team, which has won 20 league games this season and drawn just once to Manchester United, is now unbeaten in 38 league games, equivalent to a whole season. 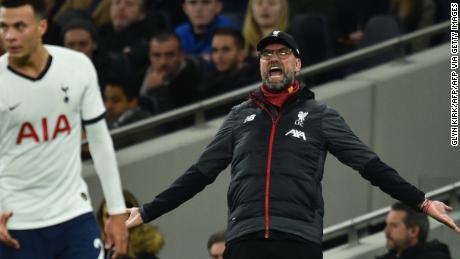 READ: Sergio Aguero hits scoring landmark as Manchester City thrash Aston VillaLiverpool has also conceded only 14 goals in those 21 games and has kept six clean sheets in the last six league matches."We don't think too much about breaking records but it's good when you break them," said Alisson. "We just want to keep going, to keep playing, to keep doing our best to make the fans happy, to make our family proud, to make the boss proud because we work a lot every day to come here on the pitch on a matchday and win the game."So, we do everything that is in our hands to make it happen and we are really happy with the three points and a clean sheet also."The Daily Mail's Oliver Holt described Liverpool as a "machine, crushing all before them as they roll on towards a title that is already almost within their grasp."Liverpool's recent record is dizzyingly, stupefyingly good, better than anything we have seen before, better than anything Europe has seen before," added Holt."It is inevitable that there will be more and more talk oRead More – Source