HomeTennisOsaka and Coco Gauff to meet at Australian Open
Tennis

Osaka and Coco Gauff to meet at Australian Open

Whether his court-side presence will help guide the world No. 4 to back-to-back titles in Melbourne remains to be seen, but it's doing the trick so far as Osaka advanced to the third round on Wednesday, defeating China's Saisai Zheng 6-2 6-4.Visit CNN.com/sport for more news, videos and featuresWith the victory, the Japanese star set up an enticing encounter with 15-year-old Coco Gauff, who fought back from losing the first set to beat Romania's Sorana Cirstea 4-6 6-3 7-5.It will be a rematch of last year's US Open when Osaka defeated Gauff in the third round before falling to Belinda Bencic in the last 16.

Osaka was relatively untroubled by Zheng. The pair exchanged breaks at the start of the first set, only for Osaka to break twice more to take an early lead in the match. Both players appeared to struggle to hold their serves in the second set — Zheng breaking twice to take a 4-2 lead, before Osaka swung the momentum back her way with two breaks of her own that eventually sealed victory in one hour and 20 minutes.READ: The downfall of Maria Sharapova"I got fired up when she got up 4-2 and people started clapping more," said Osaka. "I've been in this position on this court before. I didn't want to go three sets."Osaka was victorious over Czech Republic's Marie Bouzkova by the same scoreline earlier this week as she kicked off her title defense.

As for Gauff, her route to the third round match-up was less straightforward. The American, who defeated Venus Williams in the first round, fought back from losing the first set against Cirstea, and then again from trailing 3-0 in the third."I think I'll be less nervous this time," Gauff told reporters, referring to her upcoming match with Osaka. "I think (at the) US Open I was nervous. It was my first time on (show court Arthur) Ashe. We're both familiar with each other's games. She plays really aggressive. This time coming in I'm going to be more aggressive."READ: Rafael Nadal breezes through Australian Open first round 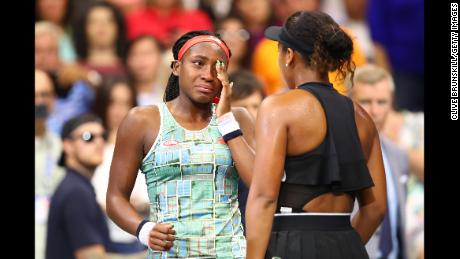 Osaka earned plaudits after she consoled Gauff following their match in New York last year. She has been complimentary of the teenager's rise over the past year and repeated her praise this time around."It's amazing what different personalities can bring to the sport," Osaka was quoted in The Guardian as saying of Gauff. "Since she is so young, she has brought so much interest and a new wave. She played doubles in one of the stadiums at the US Open last year and it was full. "That is not normal and I don't think it is something that can be taken for granted."

Elsewhere in the women's draw, there were wins for world No. 1 Ashleigh Barty over Polona Hercog and Serena Williams, who dRead More – Source