Nadal, whose sole title in Melbourne came in 2009, was tested by the No. 73 despite what the one-sided scoreline suggests. He was twice broken by Dellien — at the end of the first set and midway through the second — but powered through the third to love, wrapping up the win in just over two hours. Visit CNN.com/sport for more news, videos and featuresThe 33-year-old has the chance to equal Roger Federer's record of 20 grand slams at the Australian Open, but admits he doesn't mind what number he ends his career on. "It's not like 20 is the number I need to reach," he said. "If I reach 20, fantastic. If I reach 21, better. If I reach 19, super happy about all the things that I've done in my career."READ: Coco Gauff defeats Venus Williams as Federer, Osaka and Serena progressNadal led Spain to the final of the inaugural ATP Cup earlier this month, where he was defeated by Novak Djokovic in a singles match-up in the final. Dellien, the first Bolivian to compete at the Australian Open, had just broken inside the top 250 in the world rankings this time two years ago; two years before that he was just inside the top 500. 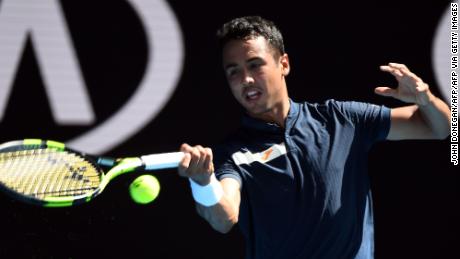 READ: Grigor Dimitrov turns heads with bold tracksuit choice"I don't know if any Bolivian might have played against a world No. 1, and on top of that at a grand slam," Dellien had said before the game. "Bolivia is treating it like a football World Cup final."There was to be no upset, however, as Nadal set up a second-round clash with either Argentina's Federico Delbonis or Portugal's Joao Sousa.