Kyrgios has often spoken about his love for basketball and was close to tears as he walked onto Melbourne's Rod Laver Arena wearing an LA Lakers jersey with Bryant's name on the back. The highly anticipated match was full of drama before world No. 1 Nadal triumphed 6-3 3-6 7-6 7-6 to book a quarterfinal against Austrian Dominic Thiem.Afterward, Nadal donned a Lakers cap and called on the crowd to give a round of applause for the NBA icon, who died alongside his 13-year-old daughter and seven others. "What can I say, I woke up this morning with this terrible news," Nadal said in his on-court interview with tennis great John McEnroe. "It's super sad. He was one of the greatest sportsmen in history. He deserves a big round of applause."It's one of these days that you want to forget but of course Kobe Bryant will be in our hearts and in our minds for the rest of our lives."Visit CNN.com/sport for more news, features and videosLast year's women's singles champion Naomi Osaka, who fell to Coco Gauff in the third round last week, also paid tribute to Bryant. She posted a photo of herself and the former Lakers star with the words "from Naomi. Always with love."Kyrgios also wore a Lakers jersey during his post-match press conference as he reflected on Bryant's legacy."I never met Kobe but basketball's practically my life, I watch it every day and I've been following it for as long as I remember … it's tough, it's horrible news," he said. "If anything it motivated me (during the game). If you look at the things he stood for and what he wanted to be remembered by I felt like if anything it helped me tonight."When I was down a break in the fourth I was definitely thinking about it and I fought back."

The rivalry between Kyrgios and Nadal has intensified in recent years and this occasion didn't disappoint. The match was evenly poised at 1-1 after the pair had won a break apiece — Nadal in the first set and Kyrgios in the second.The Spaniard edged a tense third set tiebreak and seemed on course for the win after an early break at the start of the fourth.But Kyrgios, playing in front of a lively home crowd, fought back with Nadal serving for the match at 5-4 before rescuing two break points in the following game.It was Nadal, however, who wrapped up the tie break to set up a 12th quarter final in Melbourne. Kyrgios and Nadal have a checkered history, and the Australian's mocking of Nadal's pre-serve routine earlier in the tournament added extra spice to Monday's game.When told of Krygios' teasing antics, Nadal offered a no-nonsense response: "I really don't care," he said. "I am here to play tennis."Honestly, I don't care at all. If it was funny, good. That's it." 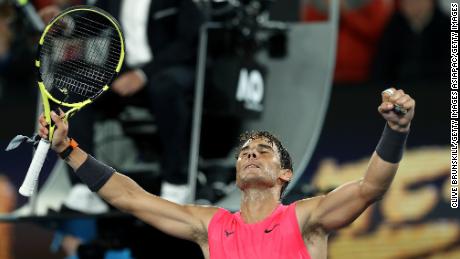 On Monday, however, Nadal heaped praise on his opponent."When (Kyrgios) plays like he did today with this positive attitude he gives a lot of positive things to our sport," he said."I encourage him to keep working like this because he is one of the highest talents that we have on our tour and I like the Nick Kyrgios (we've seen) during the whole of this tournament."Kyrgios labeled Nadal "super salty" in a podcast with tennis journalist Ben Rothenberg last year. He also admitted ahead of the pair's second-round Wimbledon clash that the two would be unlikely to go to the pub together for a drink. This was after a prickly encounter in Acapulco, Mexico — during which Kyrgios had pulled out an underarm serve — that concluded with Nadal urging the Australian to show more respect to opponents, the crowd and himself.

In Monday's earlier games, Simona Halep powered into the quarterfinals with a 6-4 6-4 victory over Belgian Elise Mertens.The world No. 3, who reached the final in Melbourne in 2018, broke early in the match only to see her advantage cut back by a resolute Mertens. READ: Coco Gauff's fairytale run aRead More – Source