Much of the buzz in Melbourne the last two days centered on the health of Federer, arguably the greatest tennis player ever and one of the most popular athletes on the globe. Medical timeouts are a rarity for the Swiss, but he required one for a groin issue Tuesday prior to pulling off a remarkable comeback against Tennys Sandgren.Would the 38-year-old thus be fit enough to contest Thursday's semifinal against Djokovic? When his name wasn't on Wednesday's practice schedule, the odds seemed to wane. And even if he did play under the lights at Rod Laver Arena, surely he'd be in no shape to oust the seven-time champion in Melbourne? Well, Federer did play and after seven games, one couldn't help but wonder if this was destined to be one of his most memorable fortnights ever. This despite Federer saying post match he gave himself a 3% chance of winning. Rallying from an 8-4 deficit in a final set tiebreak against local hero John Millman in the fourth round, Federer subsequently saved seven match points against Sandgren, who trudged back into the locker room in woe with his head down. Facing his longtime nemesis Djokovic — who dealt him one of the toughest losses of his career at last year's Wimbledon by fending off two match points of his own — Federer built a commanding 5-2 lead in the opening set.

He crushed winners off both wings and completely took Djokovic — one of the game's best ever counterpunchers — out of the equation in their 50th meeting. Federer's title run three years ago came after returning from a knee injury that sidelined him for six months. He ousted tormentor Rafael Nadal in the final as part of a trio of five-set triumphs. If he beat Djokovic for the first time at a grand slam since 2012 — and factoring in his two great escapes — the current stay in Melbourne might be getting close to matching that 2017 feat. 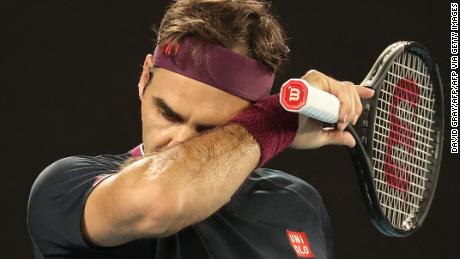 The resilient, elastic Serb, though, won five of the next six games to take the opener and reached that men's record eighth final at the Australian Open in temperatures that were still in the mid-30s Celsius when the match began shortly before 8 p.m. local time. "When I was on the court at the beginning, I was really paying too much attention on his movement, what he was really doing," said Djokovic. "I wasn't in the right balance. I wasn't hitting the ball. I wasn't executing the shots the way I wanted it."After clinching the first set, which was crucial, I think I relaxed more."He added: "Respect to Roger for coming out tonight. He was obviously hurt and wasn't close to his best in terms of movement."What a sickener it was for Federer to lose the first set despite registering a staggering 26 winners. "I was playing with nothing to lose obviously," said Federer of his fast start. "I was just trying to take big cuts at the ball, trying to keep the rallies to a minimal, make sure I keep him off guard, mix it up as much as I can. I think I returned really well in the beginning and got some really good connections going."Unfortunately I was not able to serve it out. To be honest, I feel like I should have found a way to do that, but wasn't able to."We know how tough he is, especially when you give him too many second serves. Obviously he was better on the day today, there's no question."

The hot weather quickened things on a court that is generally considered to be slowish with balls that fluff up fast. That helped Federer, yet Djokovic stepped up his game just at the right time. Federer had almost all of the crowd on his side at Wimbledon in July but it was less partisan Thursday. Chants of "Nole, Nole, Nole" reverberated around the stadium and later, "Let's go, Nole, let's go," broke out. This after the world No. 2 was extremely well supported as Serbia won the inaugural ATP Cup in Australia earlier in January. Like Nadal against Dominic Thiem a day earlier, failing to serve out the first set proved to be a fatal blow to Federer. If he had any chance of winning, prevailing in the first set was a must. Once Djokovic got to the tiebreak, there was only going to be one winner — Djokovic didn't make a single unforced error in his three tiebreak wins over Federer in last year's Wimbledon final. He didn't again in Melbourne and ended the first set with a drop shot winner and emphatic return winner. Federer then took a medical timeout for what appeared to be a back injury — the back has intermittently bothered him in the last decade — but Djokovic saw the traiRead More – Source