But there's another statistic that loomed, undermining the joy fans may have felt: Wednesday also marked the 600th day of confinement for Saudi women's rights activist Loujain al-Hathloul. The Saudi venue in Jeddah inaugurates one of several departures for the Spanish Super Cup.For example, for the first time, the Cup features four teams rather than two, with Real Madrid, Barcelona, Atletico Madrid and Valencia competing.It's the Saudi location, however — far from Spain and rife with political repercussions — that's causing the biggest stir.Indeed, the list of sporting events staged in Saudi Arabia is growing, including two Formula E races and the world heavyweight title fight between Anthony Joshua and Andy Ruiz. In the build-up to Joshua's December rematch with Ruiz, Amnesty International UK's Head of Campaigns, Felix Jakens, said the event was another attempt by Saudi Arabia at "sportswashing," when governments use the hosting of major events to divert attention away from human rights issues."We've increasingly seen Gulf countries seek prestige and bolster their international reputations by hosting major sporting events," Adam Coogle, Middle East researcher for Human Rights Watch, told CNN ahead of Joshua's fight."Unfortunately, many of these sporting events take place without these countries addressing the root causes of their reputational problems such as longstanding and systematic human rights abuses against political dissidents and activists, foreign migrant workers, and women."The General Sports Authority of Saudi Arabia did not respond to CNN's request for comment at the time.

The Super Cup's move to Saudi Arabia has been widely criticized in Spain, both because of the kingdom's human rights record and the considerable inconvenience moving the tournament has been to the fans.The move came after Royal Spanish Football Federation (RFEF) chief Luis Rubiales struck a deal with Saudi Arabia last year, reportedly worth €120 million ($133M), to host the tournament for three years.One newspaper reported that the four clubs had sold less than nine percent of the tickets available to fans.On Wednesday, a group of activists from Amnesty International gathered outside of the Saudi embassy in Madrid to stage a protest timed with the start of the Super Cup.Lined up like a football team and holding aloft the scarves of each of the four clubs competing in this Super Cup, the activists wore yellow t-shirts calling for Hathloul's freedom and raised a banner urging people to "join our team.""For decades in Saudi Arabia, women have been subjected to repressive laws that have imposed restrictions on their rights to travel independently, work or study, which limits various aspects of their lives," Amnesty International said in a statement. 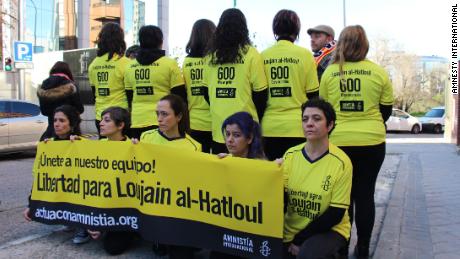 "Faced with this situation, many activists have raised their voices. One of them is Loujain al-Hathloul … one of 11 activists who are currently at risk of being sentenced to up to 20 years in prison for defending women's rights in Saudi Arabia."Amnesty International calls for all of them to be released immediately and their charges removed." The Saudi government didn't immediately respond to CNN's request for comment.In May 2018, Hathloul was one of several Saudi activists arrested by the government during a crackdown on the women's right-to-drive movement. The kingdom lifted its ban on female drivers just weeks later but Hathloul remains incarcerated, accused of activism against the kingdom's restrictive male guardianship laws and contact with foreign journalists and diplomats, according to a charge sheet reviewed by CNN. In a CNN opinion piece written last January, Hathloul's brother, Walid, said his sister alleged she had been regularly whipped, beaten electrocuted and sexually harassed in a basement she called the "palace of terror."Saudi authorities didn't respond to CNN's request for comment on Walid al-Hathloul's allegations.

There were swaths of empty seats for Real Madrid's match with Valencia — Los Blancos traveled to Saudi Arabia without their star attacking trio of Gareth Bale, Eden Hazard and Karim Benzema — but the 62,000-capacity King Abdullah Sports City was a sellout for Lionel Messi's Barcelona against Atletico.Read More – Source