That may change following Kenin's fourth round victory over the teenage sensation at the Australian Open to advance to the quarterfinals. Kenin won 6-7 (5-7), 6-3, 6-0 to advance to her first ever Grand Slam quarterfinals, where she will face Ons Jabeur, who beat Wang Qiang in her fourth-round match. After closing out the third set victory, Kenin dropped her racquet to the court and broke into tears, while an emotional Gauff received a standing ovation as she walked off the court."I'm just so speechless, I'm so happy," said Kenin after the victory. "It was such a tough match. "She had a great 2019. All respect to her, she played a great match. In the first set, she played some really good points at crucial moments."I just did the best I can, tried to take it like any other match. I tried to play my game, not focus on anything else. It means a lot — so happy to be through to the next round." READ: Saturday Stunner: Three of the top six women's seeds out at Australian Open

After beating Venus Williams in the opening round and former world No.1 Naomi Osaka in the third round, Gauff was aiming to become the youngest Grand Slam quarterfinalist since Sesil Karatantcheva at the French Open 15 years earlier.But in what was a battle of up-and-coming American players, it was Kenin who started the quickest. She broke the 15-year-old in the first game but after falling into a 4-2 deficit, Gauff came roaring back, winning three straight games and took the first set in the resulting tiebreak. After winning a back-and-forth second set, the world No.15 dominated the final set against a clearly tiring Gauff, completing the victory in two hours and nine minutes.But the world No.67 was looking on the bright side despite missing out on her maiden Grand Slam quarterfinal appearance."I'm definitely going to savor this and continue to build and get better to work for moments like this, moments like that last match," Gauff said. "Even today, even though I lost, I still had a lot of fun. I mean, now looking back, I'm not as disappointed anymore.""Even though I double-faulted today a lot, but my serve is definitely better. I think my return is better. I think I moved forward," she said. "I'm happy with how I moved, transitioned, like the baseline to the net. I'm happy how I've been doing that this week. It's something I want to continue to improve on for my next tournaments."Elsewhere, home favorite and No. 1 seed Ashleigh Barty overcame American Alison Riske in three sets to reach the quarterfinals. 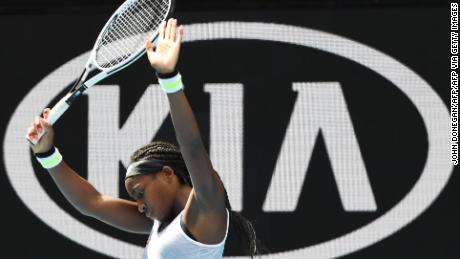 He may not have been satisfRead More – Source