Nick Kyrgios made the initial pledge of $200 (140 USD) for each ace on Thursday, before Alex de Minaur, who will star alongside the world No. 30 at the upcoming ATP Cup, replied with his own offer."I like this I will go $250 (175 USD) per ace, just because I don't think I'll be hitting as many aces as you mate," de Minaur wrote on Twitter.Their teammate John Millman also chipped in: "I'm not at your level boys but I want to get involved," he wrote. "$100 (70 USD) for an ace over the Australian summer. #servingupsomehelp"Visit CNN.com/sport for more news, videos and featuresWorld No. 99 Samantha Stosur matched Kyrgios' offer of $200, urging people to "join me in any way you can."Kyrgios also saw his call for a charity tournament to raise funds for bushfire victims answered by Tennis Australia this week. "C'mon @TennisAustralia surely we can do a pre @AustralianOpen exho (exhibition) to raise funds for those affected by the fires?" he said on Wednesday. The governing body later responded by saying "stay tuned for an announcement soon @NickKyrgios. Great to have your support."The ATP Cup also followed Kyrgios' lead by agreeing to donate $100 for every ace at the tournament. It expects the overall donation to exceed $150,000 (105,000 USD).Australia's state of New South Wales, which hosts this week's inagural ATP Cup event, declared a seven-day state of emergency on Thursday that could see evacuations take place in stricken areas. Hot, dry conditions and strong winds have heightened the risk of fires spreading in recent days and Tuesday saw seven people killed in the space of 24 hours. "For weeks we've been watching the devastation across Australia and the people affected are constantly in our thoughts," said Tennis Australia CEO Craig Tilley in a statement posted on Twitter. "We want to help these communities in a meaningful way and will announce a number of fund raising and support initiatives that will be rolled our across the ATP Cup, Australian Open and our other events over the coming weeks."Stay tuned for further announcements."The inaugural ATP Cup takes place across three cities — Sydney, Perth and Brisbane — between January 3-12, featuring teams from 24 countries. READ: Court claims LGBTQ teaching in schools is controlled by 'the devil' 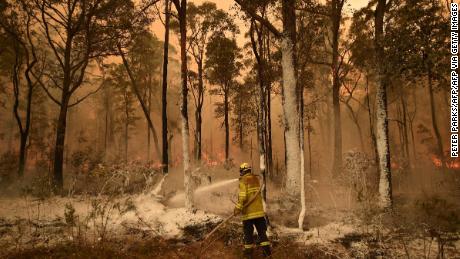 Some of the world's top-ranked players will be in action — including Spain's Rafael Nadal and Serbia's Novak Djokovic — while Kyrgios will star for an Australian team captained by Lleyton Hewitt."It's pretty tragic what's going on, especially with my hometown, Canberra, being under a bit of smoke, the most hazardous smoke in the world at the momRead More – Source