The Champions League holder had needed a draw against Red Bull Salzburg to guarantee its place in the last 16, but until second-half goals from Naby Keita and Mo Salah eventually secured a 2-0 win on Tuesday, there was a palpable sense that Liverpool was living just a bit too close to the edge for its liking.Nerves frayed as Salah missed chance after chance. They frayed even more as Salzburg frequently pierced a Liverpool defense that has struggled to keep clean sheets this season.Seven years after Chelsea had failed to reach the last 16 after winning the Champions League the previous season — could Salzburg really pull off the one of the great European shocks and condemn Liverpool to a similar fate?READ: Wijnaldum credits Klopp for developing his gameThis season, the Austrian team has proved one of the surprise packages of the Champions League under its American manager Jesse Marsch.When the two teams met at Anfield in Group E, Marsch's half-time team talk urging his players to show more fight against Liverpool went viral as the American switched between English and German, peppering his language with a fusillade of expletives in a performance that was like a one-man theater show.Given what was at stake for Salzburg — a place in the knockout stages of Europe's most prestigious competition as well as millions of extra dollars for doing so — the Austrian team got off to a blistering start as Erling Braut Håland, Hwang Hee-chan and Takumi Minamino unsettled Jurgen Klopp's team.In those opening exchanges, Virgil van Dijk was left bawling at his fellow defenders as Salzburg threatened to take the lead on several occasions.If there was tension in the Liverpool back line, an element of calm authority was provided by its goalkeeper Alisson Becker.In last season's group stage final match, Alisson had to make an astonishing last-gasp save to ensure Liverpool edged past Napoli to reach the last 16 and on Tuesday the Brazilian goalkeeper made a number of key interventions to keep the score goalless. 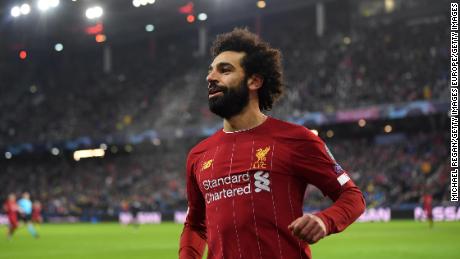 READ: Lewandowski makes Champions League historyAhead of this Group E encounter, much of the pre-media commentary had surrounded Håland, whose goalscoring has been key to Salzburg's impressive Champions League campaign — its first since 1994.Unfortunately for the home team, the 19-year-old Norwegian struggled to replicate the feats that had brought him eight goals in five games.Just before Liverpool took the lead, Håland did manage a glimpse at goal, but his normally unerring touch deserted him as he fired the ball into the side netting.Soon afterward Liverpool took the lead with a goal that bore the hallmarks of so many of their goals this season — Trent Alexander Arnold switching the play to find fellow full-back Andrew Robertson and then the speedy Sadio Mane proceeding to create havoc.After Robertson exchanged passes with Mane, the Senegalese international rampaged into the penalty area, persuading Salzburg keeper Cican Stankovic to rashly leave his goal. And when Mane crossed for Keita all the Guinea international had to do was head home into the empty net.Both Mane and Keita had once played for Salzburg and their combination for that opening goal sucked the air out of the Red Bull Arena — apart from the end where the Liverpool supporters were congregated.Seconds later Salah well and truly burst Salzburg's balloon.Jordan Henderson's pass sent Salah clear and as Stankovic ran out of his penalty area, the Egyptian international pushed the ball past the Salzburg keeper, but in doing so the angle to the opposition's goal narrowed alarmingly. Somehow, Salah recalibrated his sights and guided his shot into the net. After the game Robertson called the goal "ridiculous" while Liverpool midfielder James Milner quipped in a tweet: "#MolovesPythagorastheorem."Having missed a whole host of chances previously — arguably all more difficult than his goal — Salah's ability to remain unflustered at a pivotal moment impressed Klopp."When we had the ball we had sitters and didn't score," the Liverpool manager told BT Sport. "Then Mo scored the most difficult situation of the whole night — he scored that goal."I have no idea [how]. With his quality, hRead More – Source