Standing inside a community center in the UK city of Liverpool, Kelly just stood and stared at the packet.Curious about the line of people coming out of the center close to Anfield, home of Liverpool soccer club, Kelly pulled over and asked what was going on.He was told it was a line to use the food bank. Inside, he began to talk to those who had set up the stock room."I'd never seen anything like it — it was the biggest bag of pasta I had seen in my life," Kelly told CNN. "To say the shelves were bare was an understatement. The only things left were the pasta and six tins of tuna the food bank was going to have to divide equally so everyone got something."I knew then we had to do something."Kelly left a changed man and embarked on what he describes as "drastic action needing to be taken."

On Thursday, as millions go to the polls for the country's general elections, the issue of food poverty is likely to be a key issue for a number of voters.In May, a damning report published by Humans Rights Watch (HRW) said the British government was violating its obligations to ensure families have enough food to live on. 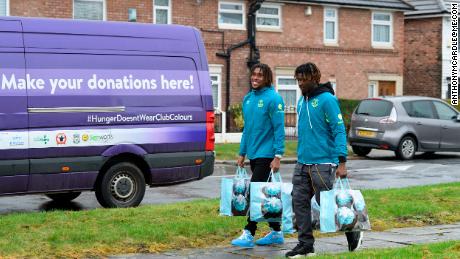 HRW cited the program of austerity which has seen cuts to the country's welfare system since the Conservative Party took office in 2010 as one of the leading factors behind food poverty.In response, a government spokesperson rejected the report's findings as "misleading," in a statement to CNN.Another report, published in May by the United Nations, painted a picture of a country where "compassion" for the poor had been replaced with a "mean-spirited" approach akin to that portrayed in the 19th century workhouses featured in the novels of Charles Dickens.In Liverpool, which is ranked as the fourth most deprived local authority by a 2019 government report, Kelly has helped inspire a revolution among the city's soccer supporters to help tackle food poverty at a time where the country is experiencing an upsurge in food bank users.For the past four years, Kelly, an Everton fan, has helped lead the "Fans Supporting Foodbanks" campaign, a partnership between the Everton Supporters' Trust and Liverpool fans group, Spirit of Shankly. 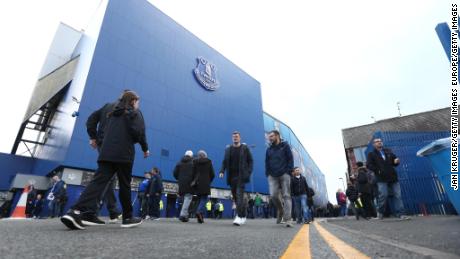 From standing outside with just a garbage can full of beer cans, chip wrappers and the odd bag of food, the venture has grown exponentially, now boasting two vans and weekly collections outside of Goodison Park and Anfield.According to Kelly, food collected by Fans Supporting Foodbanks accounts for 30% of the donations made to food banks on Merseyside.Last year, 25% of the 90 tons of food collected by North Liverpool Foodbank was donated on matchdays by Everton and Liverpool supporters through the Fans Supporting Foodbanks initiative"At best, food banks are a sticking plaster for a gaping wound," Kelly said. "We have literally been saying since day one that there's a humanitarian crisis on the streets of every major town and city of the UK."That humanitarian crisis has grown quickly over the past four years and become an epidemic."Where we've been extremely fortunate is that we belong to the two biggest families on Merseyside — a family of Evertonians and a family of Liverpudlians."That probably encapsulates nearly everyone in the city and because there's a football element to it and someone may say no to most other people, because of the football interest, people tend to say yes." 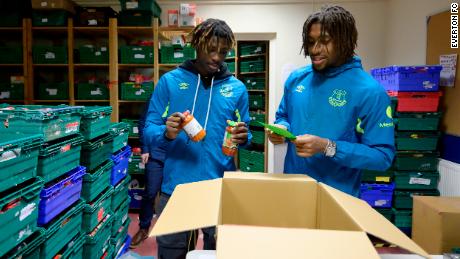 According to figures provided by Everton, 11,000 people were helped by north Liverpool Foodbank last year, with around 40% of users being children.The program benefits from close links with the city's two biggest soccer clubs — European champion Liverpool and its close rival Everton.The two clubs host collections outside their respective stadiums each week and players and staff are encouraged to get involved on a regular basis.Around 400-600 people a month are fed from the donations brought on match day, Sarah Atherton of the Everton in the Community program told CNN.Atherton has spent the past six years working with the local community in a city that hasthe second highest number of areas in the most deprived 10% nationally. 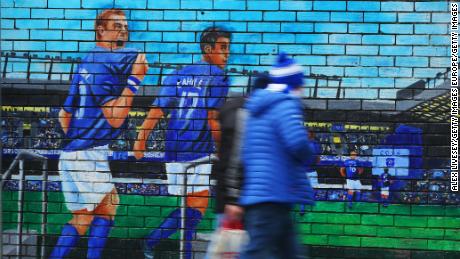 The "Blue Mile" program, which works with 10,000 residents in the vicinity, offers a number of free projects including employment and education, help for asylum seekers, advice on health care, as well as its work on food poverty.The club is also set to relaunch it's "People's Picnic" program which will be held throughout the season with those living in sheltered accommodation in the local area invited into the stadium for a hot meal in the club's lounges after the game has finished. 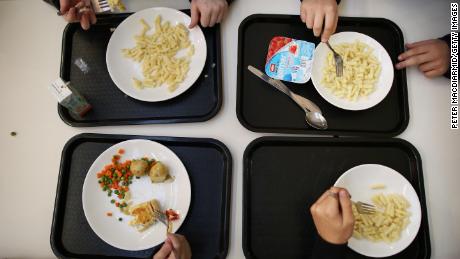 The club also has a partnership with nine local Farmfoods stores which donate to local food banks."I think Everton is very, very unique in sense of where it's situated," Atherton told CNN. "It's situated in such a tight neighborhood and one that massively supports the work we do."Our fans are massively supportive of food banks and if we can have each of the 39,000 fans bringing one tin of food to our matchday on the 19 days each season then it will make even more of an immense impact than we do now."Everton is not the only club to run such projects, with several others across the country now taking up the baton in helping their respective local communities at a time where poverty remains a huge issue in the UK.

A report published in November by anti-poverty charity the Trussell Trust found that more people than ever before are using food banks in the UK. 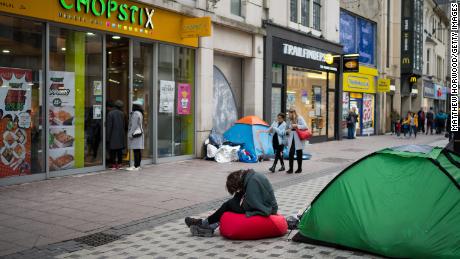 The Trussell Trust says that it handed out a record 823,145 food parcels between April and September 2019 with 301,653 of those going to children.The overall figure was up 23% from the same period last year — the steepest rise the charity has recorded over the past five years.There are 1,200 food banks in the Trussell Trust's network which it says makes up around two-thirds of all food banks in the UK.It says that over the past five years the number of emergency food parcels distributed within its own network has increased by 73%.The latest figures came shortly after the Trust published "State of Hunger" which it says is the most in-depth study ever published on food bank use in the UK.In it, the Trust found that the average weekly household income of users at food banks is just £50 ($65). The study also stated that one in five users does not receive any money whatsoever in the month before being referred for emergency food. It also said that 94% of food bank users are destitute, unable to afford essentials to eat, keep warm, dry and clean. 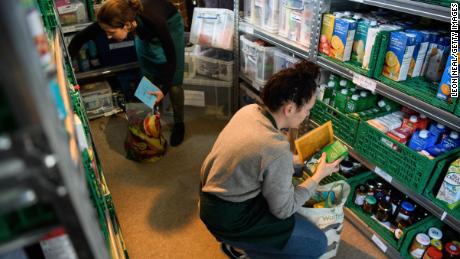 "We're so thankful for the generosity of the people across the UK, the Football Fans Supporting Foodbanks initiative has been amazing," Abby Jitendra, the Trussell Trust's policy & research manager, told CNN."Clubs are really anchored in their communities and it's not surprising to see there are so many positive relationships with food banks."But of course as we always say, the generosity of people is amazing but we can't forget that the problem shouldn't be there in the first place."Nobody in this country should be in a situation where they have to rely on a food bank to feed their family."Take a glance through social media and you will see football supporter groups from across the UK asking fans to bring donations to stadiums across the country.One of those groups, the Newcastle United Fans Foodbank, has been supporting the city's West End Foodbank."Normally when you go to football you can lose yourself and allow everyday travails to pass into the distance," says Bill Corcoran, who helped set up the collection nearly three years ago."But when you're watching the football and then you realize that just over the road there are kids going hungry then it just makes you think that there are more important things."For some people it's a case of life and death and football is something that can really help."Our fans have been brilliant and we've been tolRead More – Source