The headline over photographs of Chris Smalling and Romelu Lukaku sparked widespread criticism for being racist following the publication of Italy's Corriere dello Sport Thursday.Both players and their clubs, AS Roma and Inter Milan respectively, expressed their disapproval, and AS Roma and AC Milan banned the publication from its facilities or from interviewing its players until January.After Friday night's Serie A match, which ended 0-0 in Milan, the two players met on the San Siro pitch. Smalling tweeted a picture of their embrace with the words "My brother." The pair were former team mates at Manchester United and Lukaku later retweeted Smalling's post.READ: Italian newspaper sparks race row with front page

On Thursday Smalling tweeted: "I hope the editors involved in running this headline take responsibility and understand the power they possess through words, and the impact those words can have."Lukaku described it as one of the "dumbest headlines" he'd ever seen.The paper, however, doubled down in its defense of the front cover, claiming the accompanying article was staunchly anti racist, and led with another rebuttal of its critics on Friday's front page."Racist to who? Lynching of a newspaper that has been fighting for freedom and equality for over a century," read the latest headline."Black Friday, for those who want and can understand it, was and is only the praise of difference, the pride of difference, the magnificent wealth of difference," continued Ivan Zazzaroni, the newspaper's editor."If you don't understand it, it's because you can't understand it or because you pretend you can't."Black Friday is the innocent title of a newspaper, ours, which for almost a century has been defending with obstinacy and passion, simply passion, the values of sport, of football."Yet it has been turned into poison by those who have the poison inside themselves. It is an innocent title."READ: Italian newspaper accuses critics of 'lynching' 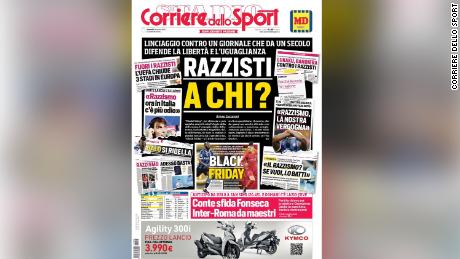 'Problem of our society'

The race row comes at a time when Italian football has been criticized for the way it has handled racist incidents.Earlier this season, Lukaku was the subject of monkey chants from Cagliari fans and Brescia striker Mario Balotelli said he had experienced racial abuse by opposition Verona fans.Both incidents were met with meager penalties — Verona was handed a one-match partial stadium closure and Cagliari escaped any serious punishment.In the San Siro Friday, Roma supporter Simone told CNN racism is rife in Italy."I think there is racism in italian soccer," said the 32-year-old. "There is racism because many minimize the headline 'Black Friday.'"You shouldn't even think of skin color as a characteristic to highlight in a player."First, we have to stop pretending that it's not a problem or that it's a minor problem."It's a problem of our society, racism. In the stadium and outside of the stadium."What is needed is for all the forces involved to actively react with the necessary stadiums to identify, punish who is at fault."

'Being black is just an observation'