The Europa League match between Italian club Lazio and Scotland's Celtic in Rome's Stadio Olimpico was decided by French midfielder Olivier Ntcham's 95th-minute winner in favor of the Scottish team in a game that finished 2-1.For the previous 94 minutes, a number of Celtic fans had reveled in taunting their Italian hosts, particularly after a similarly heated game in Glasgow between the clubs a fortnight ago.Shortly after Lazio's arrival in Glasgow on October 24, videos appeared on social media seemingly showing Lazio "ultras" — a hardcore faction of supporters — making fascist raised-arm gestures as they walked through the city center. The Rome club has found it difficult to shake off historical associations with fascism. Mussolini was a reported fan of the club and in the past, Lazio has had players who have openly displayed fascist beliefs, such as Paolo Di Canio.Former Lazio player Di Canio, who also used to play for Celtic, said in 2005 that he was "a fascist, not a racist."READ: Italian youth soccer team scales back plans to play in blackface after criticismDuring the Glasgow game, the Celtic fans unfurled a banner with an image of Mussolini hanging by his feet and the message "Follow Your Leader."The banner refers to Mussolini's death to Italian partisans in 1945 and his hanging in an Esso garage in Milan.This prompted Mussolini granddaughter Alessandra Mussolini to call for Celtic fans to be prosecuted.Fast forward to Thursday and some Celtic fans continued to taunt their Lazio counterparts. A picture on social media, showed a group of Celtic fans in the Stadio Olimpico holding up a fellow supporter from their legs.On the eve of the game, Celtic confirmed that two of its fans had been stabbed in Rome."Celtic can confirm that two fans have been injured after being stabbed last night. Both are now in hospital and will receive every support from the Club and the British consulate in Rome" said Celtic on Thursday.Ahead of the game in Rome, Celtic had advised its fans to stay in large groups where possible, keep a low profile in the city and avoid wearing club colors. 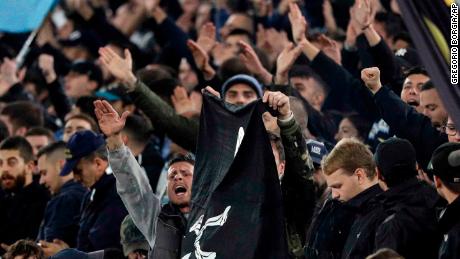 The club also said that "banners containing any political message or symbols will not be allowed" at the game.A bus carrying Celtic fans was attacked after it broke down, according to a BBC reporter at the game.European football's governing body UEFA said their "disciplinary body will await reports from last night before deRead More – Source