Building on the growing popularity of the women's game, the pre-match sales for the friendly clash at the iconic stadium had come close to a sell out, with the eventual attendance of 77,768 setting a new high mark.Follow @cnnsport By comparison, the previous record of 45,619 came back in 2014 when England lost 3-0 to the same opponent at Wembley, since when its playing fortunes have markedly improved with successive semifinal appearances at the 2015 and 2019 Women's World Cups.But a poor run since its heroics in France this summer has seen Phil Neville's team struggle and a 90th minute winner from Klara Buhl extended Germany's fine record of seven straight wins on English soil.It was England's fifth defeat in seven games since the World Cup finals, but the expectant and boisterous home crowd at least saw a spirited display after captain Alexandra Popp put Germany ahead in the eighth minute with the visitor totally in control. 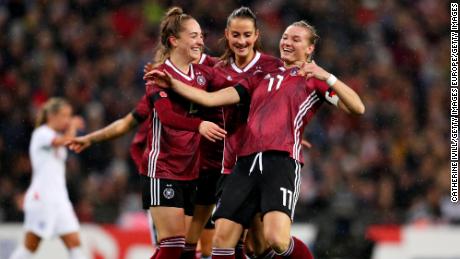 Nikita Parris might have equalized later in the first half, but saw her penalty saved by Mere Frohms, only for England's prolific striker Ellen White to level on the stroke of halftime with an opportunist finish.A massive roar greeted the announcement of the record crowd during the second half, but England was unable to gain inspiration and it was Germany that applied late pressure as Buhl's left foot shot from an assist by Dzsenifer Marozsan settled the issue.READ: The match which changed women's footballFormer Manchester United and England star Neville was left bitterly disappointed after another defeat."We are not playing to our maximum and not reaching the levels we reached at the World Cup," he said.'"It was nowhere near the level I want as a manager, we have to make massive improvements, the results we have been having are unacceptable."

His worst fears would have been confirmed by the early exchanges as England struggled for possession before Popp flicked a header past Mary Earps from a Kathrin Hendrich cross.England slowly worked its way back into the match, with Beth Mead offering a good option in rare attacks.She was floored by a heavy tackle by Sara Doorsoun in the 28th minute, with the German player lucky to escape with just a yellow card, before earning a penalty in the 35th after she was pulled down by goalkeeper Frohms.Parris, who missed two spot kicks in the World Cup, saw her effort saved by Frohms before White partially spared her blushes by beating the offside trap to level it up just before the break, her sixth goal in her last five England games.Read More – Source

Pele plays down fears over his mental health