Named as host in 2010, Qatar has rarely been out of the headlines over its human rights record, its prohibiting of homosexuality, allegations of corruption in the way the 2022 World Cup was awarded and the fact that the tournament has been moved to the winter because of the high summer temperatures.Qatar has consistently denied any wrongdoing during the World Cup bidding process."I think we were expecting it," Nasser Al Khater told CNN Sport's Amanda Davies in Doha, as he reflected on the level of criticism directed at Qatar. "I don't think we were expecting the severity of it."We know for a fact that every major event has its fair share of criticism," he added. "Is that based on reality? Is that based on perception? Is that based on selling headlines? We know that we recognize that. "Was Qatar treated unfairly? Yes, in my opinion, very much so. I believe that Qatar has been judged by the court of perception very early on."READ: Dutch football match halted after 'Black Pete' chants

The world's richest-per-capita country in the world, Qatar has been fiercely criticized over its labor laws and treatment of migrant workers, though in October, the International Labour Organization announced that the Gulf state was ready to scrap the infamous "kafala" system in January 2020.Kafala, which ties workers to their employers through a sponsorship, means they are unable to leave their job or the country without their employer's permission.The ILO also said a new law would be introduced to establish a "non-discriminatory minimum wage, which it says is the first in the Middle East.""The proposed reform of kafala is potentially very significant in the sense that they are saying they will allow workers to change employers without the employer's permission," Nick McGeehan, director of Fair Square Projects, an organization that conducts research on migrant workers' rights, told CNN Sport."They've actually provided some detail this time on how they would do it — it's not just going to be a question of rebranding kafala (which is basically what they did when they previously announced its abolition in 2014 and 2016)."But it comes with a massive caveat — nobody has seen the draft law. All we have is a press release, albeit one that has been endorsed by the ILO. So, given previous record on this it would be very unwise to offer anything than very cautious optimism."On the exit permit they've made good progress and have indicated it will soon not apply to anyone. Although again it's worth pointing out that other Gulf states don't have this system so they're hardly leading the way on this."The other labor reforms — wage payment protection, worker insurance fund, fast track courts — aren't really performing as they are supposed to."Even accounting for the fact that these are relatively new, they are still wracked with problems and while they do constitute potential progress, there is as yet no evidence that they have stopped employers exploiting workers or significantly improving access to justice."READ: Record crowd watches Arsenal beat Tottenham in Women's Super League 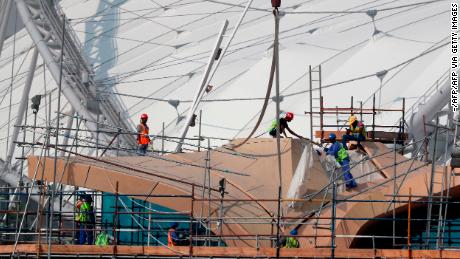 McGeehan says the situation surrounding worker deaths remains dire with no data having been released since 2013. In 2013, the Qatari government revealed that 520 workers from Bangladesh, India and Nepal died in 2012 — 385 of them from unexplained causes.Last year, authorities told HRW that 35 workers had died, mostly from falls."New research that has drawn a causal link between heat and deaths, and a second report commissioned by the ILO which supports the position that workers are extremely vulnerable to heat," he added."This was heavily spun by the Qataris and in particular by the Supreme Committee but these facts are undisputed: we don't know how many workers are dying; on the evidence available up to 75% of deaths are unexplained; there is now a significant body of highly credible research that suggests heat and humidity and poor protection from those are a factor in the pattern in deaths."In October, Qatar said it was conducting a review into the impact of heat stress together with the ILO and the Supreme Committee for Delivery & Legacy. While acknowledging there have been challenges along the way, Al Khater defended Qatar's record on migrant workers and kafala."When it comes to workers' welfare, we raised our hand very early on and said: 'This is an area that is challenging and we know that there needs to be a lot of work.'"Nobody can deny today and not by us saying this, but by internationally recognized bodies, the amount of work that went into legislation and the amount of work that went to the improvement of workers' conditions, rights have in my opinion are unprecedented, the speed of the way things have happened here."READ: Ronaldo scores 99th international goal as Portugal qualifies for Euro 2020 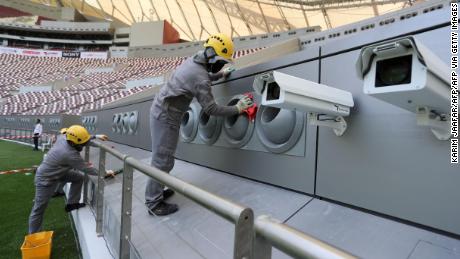