Earlier on Sunday, Roberto Bautista Agut edged past Felix Auger-Aliassime 7-6 (7-3), 6-3, ensuring Nadal's 6-3, 7-6 (9-7) win over Shapovalov gave Spain an unassailable 2-0 lead in the revamped tournament.In 2010 Nadal won three majors, but the 33-year-old will likely look back on 2019 as an extraordinary year as he won the French Open and the US Open, made the Australian Open final and also reached the Wimbledon semifinals.The Mallorcan also finishes the season as world No. 1. Oh and he married longtime partner Xisca Perello last month."I'm incredibly happy to end the year like this," Nadal, who also won the Davis Cup in 2004, 2009 and 2011, told reporters.Nadal's victory against Shapovalov ensured the 33-year-old won all of the eight rubbers he played during the 2019 Davis Cup event. READ: Nadal angered by 'bullsh**' marriage question Sunday's final marked the end of a week of international tennis in which soccer star Gerard Pique's controversial $3 billion revamp of the Davis Cup had begun in front of a less than packed house in Madrid.The Barcelona defender's investment company Kosmos has signed a 25-year deal to run the new-look nations team event as part of a pact with the International Tennis Federation, but the format has attracted plenty of criticism.Instead of the traditional three-day format where one nation hosted another — bringing a unique atmosphere and often full stadiums, especially at the highest tier — 18 nations assembled in Madrid, with matches contested over the best of three sets. 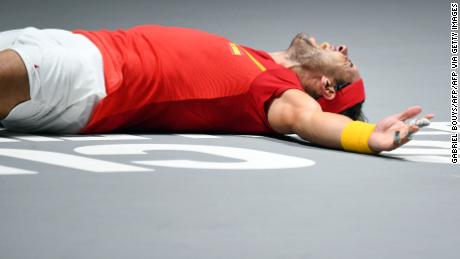