Over the last weekend, both Italy and Brescia striker Mario Balotelli and Napoli's Senegalese defender Kalidou Koulibaly were subjected to racist abuse from opposition fans. In September, former Manchester United striker and current Inter Milan striker Romelu Lukaku was subjected to monkey chants as he took a penalty at Cagliari. Despite reoffending, Caligari have escaped any serious punishment for the racism of their fans. The recurring nature of racist incidents in Italy suggests to Portugal midfielder Joao Mario — who moved to Italy in 2016 after joining Inter — that not enough is being done to address to it. "It happens every week in Italy," Mario, who now plays for Lokomotiv Moscow, told CNN Sport's Alex Thomas. "It's sad although I'm not there anymore but when I try to see on the newspapers, on Twitter and on news networks, it's always the same. "It's always the same so they need to sue people, arrest people until they understand they need to respect people, all the colors, all the people. "It's a football game, everyone loves football. In Italy, they love football, so they need to change."READ: This footballer was racially abused by a fan … then banned for six matches

Mario, who is of Angolan descent, has been part of games where fans have racially abused players. "People need to change in Italy. For me, it's really sad because I used to live there. It even happened to me on the pitch. The police, the government, the mentality in Italy needs to change."Mario's former Inter teammate and friend, Dalbert, was racially abused this season playing for Fiorentina away at Atalanta. The Champions League club was fined just $11,000 (€10,000 euros) for the racist chanting by its fans.In a way of punishing Hellas Verona for abusing Balotelli, a Serie A tribunal handed out a one-match partial stadium closure to the club.It comes after the club confirmed they had banned the head of the club's Ultras Supporters Group — Luca Castellini — from its matches until June 30, 2030, for saying Balotelli could never be considered completely Italian.The repeated nature of the incidents in Italy highlights to Mario that it is a serious "problem" and that dealing with racism can't be left to just the footballing authorities."I think until, not even just UEFA and FIFA, but the police and the government — someone needs to do something," added the 26-year-old Mario. "They need to start taking these things seriously to process people, to sue people, to arrest people. It's a really important matter."READ: Is team's decision to walk off pitch over racist abuse a watershed moment for soccer? 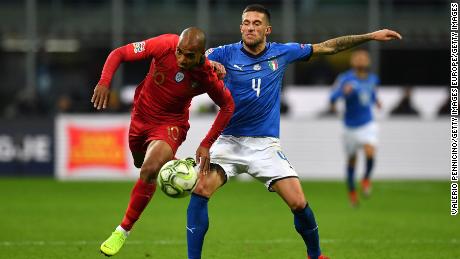 Playing with a great

After a few disappRead More – Source