The soccer superstar adorns billboards across the country, has bars named in his honor and attracts a dedicated fan base which follows him wherever he goes.But the Tottenham Hotspur forward, who has plied his trade in the English Premier League since 2015, has one very special superfan.Minji Seo lives in South Korea, thousands of miles away from her hero, but that doesn't stop her from paying homage to the 27-year-old whenever she can. "My life's passion is Son Heung-Min," Seo told CNN Sport, beaming at the opportunity to speak about her idol. "When I wake up, the first thing I think about is Son." READ: How 'Little Seoul' fell in love with its favorite son, Son Heung-Min
READ: Jose Mourinho and Tottenham — A match made in heaven … or hell?

In October, Seo traveled over 5,000 miles to watch Son play in Tottenham's UEFA Champions League group fixture against Red Star Belgrade. To her sheer delight, Son scored two goals in his side's 5-0 romp."Watching Son makes me proud as a Korean," she added. "I spend 50% of my income to follow Son."Despite her own father saying she's "crazy," there is nothing that can get in the way of her adoration for the winger.She even had the pleasure of meeting Son when he returned to South Korea for international duty. "He said that it's better than smoking or drinking," she laughed, speaking about her father's opinion of her obsession. READ: Gareth Bale pokes fun at critics

A star is born

Born in Chuncheon, northeast of the capital Seoul, Son made his name first in Germany after moving to Europe as a teenager with Hamburg. His success earned him a move to Bayer Leverkusen in 2013 where he caught the eye, persuading Tottenham to pay a reported $28 million for the forward. That fee has been more than repaid since, with Son helping the club reach the Champions League final in 2019. His performance and achievements have established Son as one of the most exciting players in the Premier League, while earning him huge popularity both in Korea and much nearer his new home."I try to be humble. I think we are all same as humans. It doesn't matter if I'm a football player, or an actor, or a singer," he told CNN Sport."I just want to behave like a normal man, and I try to make our country proud."
READ: Record crowd watches Arsenal beat Tottenham in Women's Super League 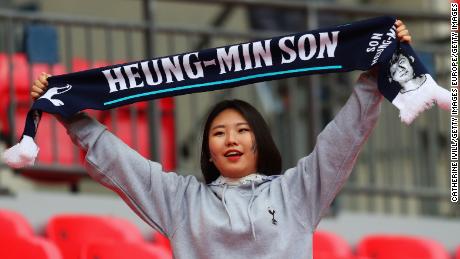 However, staying humble is easier said than done as 'Sonsation' sweeps across South Korea. People are desperate to find any update Read More – Source