Håland has ‘potential to be an incredibly great player’

In the space of a few months Håland's goalscoring feats — he's bagged 22 goals in 18 appearances, including four hat-tricks in the Austrian top flight and the Champions League — has put him on the radar of a host of Europe's leading teams."This club is a wonderful place for young players to develop and it's a quiet town," Red Bull Salzburg head coach Jesse Marsch told CNN Sport's Alex Thomas, as he reflected on Håland's breakout season."It's also a league where players can make mistakes, but still thrive and be successful before they take the next big step into bigger leagues."READ: Håland scores hat-trick on Champions League debutThe likes of Liverpool's Sadio Mane, Inter Milan's Valentino Lazaro, Eintracht Frankfurt's Martin Hinteregger or RB Leipzig's Dominik Szoboszlai have all recently come through Salzburg's ranks and successfully integrated into European top clubs.Håland moved to Salzburg in Austria in January 2019 from Norwegian club Molde and started the new season in red hot form, scoring a hat-trick in his first game of the season — a 7-1 Austrian Cup win against SC-ESV Parndorf — and in his fourth game — a 5-2 Austrian league win against Wolfsberger.In May, Håland scored nine goals in a single game for Norway's Under-20 team as it defeated Honduras 12-0 in a World Cup game.He then seamlessly transferred his goalscoring form to Europe's leading club competition, becoming the first ever player to score six goals in his first three Champions League appearances.That hot streak quickly had him reportedly linked with the likes of English Premier League clubs Manchester United, Arsenal and Liverpool as well as RB Leipzig of the German Bundesliga.Marsch admitted it will be hard for the Austrian club to keep hold of Håland but hopes the bond between his father Alf-Inge, who played for Leeds United and Manchester City, and Salzburg's sporting director Christoph Freund could have an influence."They have a really good relationship. We've all been very open with each other in terms of protecting Erling from the media and the fact that there are obvious steps for him and us as a club and how to move forward together." 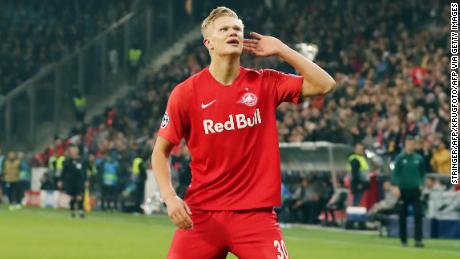 Håland was born in Leeds and has understandably formed an affection for English soccer, which brings up the question of when he will finally make the move.Marsch hinted it could be quite soon: "We're hopeful that Erling finishes the year here and that he can continue to grow and become a bigger man."The six feet 4 inches tall teenager has everything to follow his father's footsteps and even surpass him. Since joining Salzburg, he scored 27 goals in 23 appearances and Salzburg boss Marsch pinpointed tRead More – Source