HomeTennisDjokovic races to opening victory in bid for No.1 spot
Tennis

Djokovic races to opening victory in bid for No.1 spot

Djokovic is aiming to end the year as No.1 for a sixth time, equaling the record of American great Pete Sampras, and for his sixth title at the season-ending finale, matching Roger Federer, one of his main rivals this week in London.Follow @cnnsport He made light work of Italian Matteo Berrettini, winning 6-2 6-1 in just over an hour at the O2 Arena in the Bjorn Borg Group opener.Berretinni, the first Italian man to reach the year-end championships since Corrado Barazzutti in 1978, came out fighting and showed early signs of his quality to hold for one game all.But he was undermined by 17 unforced errors in the first set as nerves played their part, allowing Djokovic to break twice and seal the set in 28 minutes.Eighth seed Berrettini produced some of his best play at the start of the second, but it could not prevent him being broken twice as he trailed by a set and 4-0. Djokovic dropped his own serve to give Berrettini a glimmer of hope, but a third break of his 23-year-old opponent settled any nerves and he served out for victory in 62 minutes. 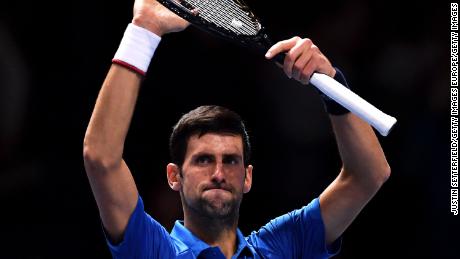 "It was not easy for him at his first Finals match, I knew he would be nervous at the beginning and I used my experience to perform well," said Djokovic as he reflected on a comfortable victory.

Stiffer tests await, including Federer and Dominic Thiem, who were playing the second match of the Bjorn Borg Group later Sunday..To have a chance of overtaking Rafael Nadal at the top of the rankings Djokovic must at least reach the final, but he has made an imposing staRead More – Source