Could Salzburg and Håland knock out Liverpool?

In June, Liverpool were celebrating picking up their sixth Champions League trophy in Madrid. In December, the reigning champion could exit the competition in the group stages should things go awry in Austria.Red Bull Salzburg — who have turned a few heads already in this year's competition — stand between Liverpool and Champions League misery. The Austrian team is taking part in their first Champions League campaign since 1994 and with one game left, is just two points behind Napoli and vying for the last 16. Liverpool goes to the Red Bull Arena on December 10 knowing a draw is enough to progress. Technically, a loss wouldn't necessarily mean curtains too but the Reds would be relying on a slip up from Napoli. Don't hold your breath, the Italian club face Genk, who have picked up a solitary single point in the group stages and are struggling at the bottom of Group E. READ: Messi steals the show on his 700th Barcelona appearanceREAD: Meet the man not even Messi can keep up with

Austrian underdogs with a secret weapon

Salzburg has been tearing their domestic league apart this season — they are still unbeaten — having scored 58 goals in just 15 games. Led by a coach trying to change the image and stereotypes surrounding Americans in management, the Austrian side have looked impressive in their Champions League games this season."I don't just want to be some American guy trying to coach. I want to try to really embody so much more than that," Salzburg coach Jesse Marsch recently told CNN Sport.Salzburg has provided plenty of evidence to suggest Marsch's team could cause an upset against Liverpool. Salzburg drew 1-1 against Napoli away from home, the same scoreline Liverpool mustered against the Italians on Wednesday night at home.Earlier in the campaign, Salzburg was 3-1 down before the break to Liverpool at Anfield — only for an inspiring (and slightly explicit) halftime talk — to urge the Austrian team on to a 4-3 fightback. That speech has since gone viral and has helped bolster the image of Salzburg and Marsch this season. On top of that, Salzburg has a wonderkid striker who can't stop scoring. Erling Braut Håland's goal against Genk on Wednesday night made him the first teenager in history to score in five consecutive Champions league games. He has now scored 23 goals in 19 appearances this season — in the Austrian top flight and the Champions League — and is catching the eye of teams across Europe. Only Bayern Munich' sRobert Lewandowski, with 10 goals, has scored more than Håland's eight in the Champions League this season.Could Håland cause heartache for Liverpool come December 10? 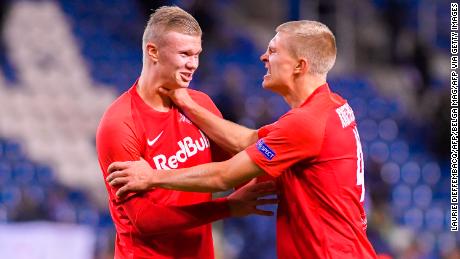 December could be a defining month for the team tipped to be Premier League champion — a title they haven't won before. Liverpool last won English football's top-flight title in 1990. Jurgen Klopp's side could play nine games in December alone in a bumper combination of Champions League, Club World Cup and English Premier League fixtures.So it could have done with a less anxiety-inducing final group stage match in the Champions League. December is often a month when player fatigue and injury can derail a team. In Liverpool's game with Napoli, they lostRead More – Source