Many were expecting Chelsea and Ajax, two of this season's most exciting young teams in Europe, to serve up a treat at Stamford Bridge, but none would have predicted quite how crazy it would become.Both sides traded what they must have thought were knockout blows throughout the tie, only for the other to haul itself off the canvas — for Ajax, it came with a helping hand from VAR.When the referee blew his whistle to signal the end of the game with the scores tied at 4-4, you were left wondering how it wasn't more.Last season, the Champions League bore witness to some stunning comebacks; Liverpool's famous Anfield turnaround against Barcelona and Tottenham's Houdini act away to Ajax to name the two most memorable.Chelsea's this evening set an early marker for this season that will surely be hard to top.The first half was eventful enough — in fact, make that the opening four minutes.After Quincy Promes' free-kick was inadvertently diverted into his own goal by Tammy Abraham, Jorginho equalized from the penalty spot just 67 seconds later after Christian Pulisic was clumsily taken down.Before Chelsea had a chance to breathe, Ajax was suddenly 3-1 up. Hakim Ziyech, a silky player many expected to leave Ajax in the summer, was instrumental to both the second and third goals.The first came as Promes nodded home from Ziyech's sublime cross and the second was something of a freak goal.The Moroccan's whipped free-kick cannoned off the far post and hit Kepa Arrizabalaga square in the face before going over the line. 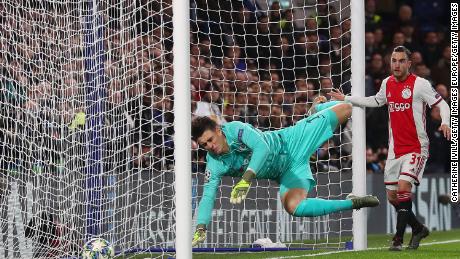 When Donny van de Beek put Ajax 4-1 up after an hour Stamford Bridge was almost completely silent.Ajax supporters had been denied tickets to this match by UEFA following crowd trouble during the Dutch club's recent trip to Valencia, and so the corner of this stadium usually reserved for some of Europe's most raucous fans was empty.Those Ajax fans watching on television back in the Netherlands must have been agog as the match descended into brilliant chaos and became one the all-time great Champions League clashes.Just after the hour mark, Chelsea captain Cesar Azpilicueta snuck in at the far post to get the faintest of touches onto Tammy Abraham's wayward shot and spark hope of a revival.Eight minutes later, Jorginho scored his second penalty of the match — but not before referee Gianluca Rocchi took center stage.The Italian official first sent off Daley Blind — a deserved second yellow for a wild lunge — then awarded Chelsea a penalty for a handball by Joel Veltman.The decision seemed harsh enough, with the ball taking a huge deflection before hitting Veltman's arm, but Rocchi then proceeded to send the Dutchman off for the perceived infraction.After Jorginho's successful penalty made it 4-3, that left Ajax with 20 minutes to hold for the win with just nine men and neither of its central defenders.It managed to hold on for just another four minutes, as Reece James reacted first after Kurt Zouma&#Read More – Source