The Dutchwoman replaced Naomi Osaka Tuesday after a back injury ended the Japanese superstar's season, and she duly produced a stirring comeback to oust the world's top-ranked player Ashleigh Barty 3-6 6-3 6-4 in the Red Group.Last year, Bertens came in for the injured Simona Halep and advanced to the semifinals, ousting top seed Angelique Kerber along the way. Follow @cnnsport Her second victory over a world No. 1 might go some way towards easing the pain of missing out on direct acceptance into the elite eight-woman event in Shenzhen, China. Bertens was pipped for the final spot by Belinda Bencic after the Swiss, who defeated Petra Kvitova 6-3 1-6 6-4 later Tuesday, won the title in Moscow just over a week ago. And it came only a few weeks after Barty saved a match point against Bertens in the semifinals of a tournament in Beijing. A win in that match would have sealed Bertens' spot at the year-end championships. Barty slipped to 1-1 in the group stage although a defeat seemed highly unlikely early in the second set. The Australian led by a break on two different occasions including 3-2, well on course to extend her record over Bertens to a perfect 6-0. But the French Open champion's all-around game gradually waned and Bertens, who can similarly defend and attack in equal measure, prospered. Bertens had to withstand a comeback in the final set, shutting the door after a 4-0 lead became 4-3. She notched up a tour-leading 55th win despite dealing with understandable fatigue.

Bertens has played in tournaments every week since the US Open, including last week at the Elite Trophy — a secondary year-end championships — in Zhuhai near Shenzhen. She admitted she was "OK sitting on the couch" before getting the call to play. "I was really tired," Bertens told reporters, according to the WTA. "But then yesterday I hit for five or 10 minutes. I just rested completely."I think today I already felt much better. Of course, it's not like after one day you are completely back to full energy. Of course, you're like, 'OK, one more, one more.' That keeps me going. We see how far I can go." 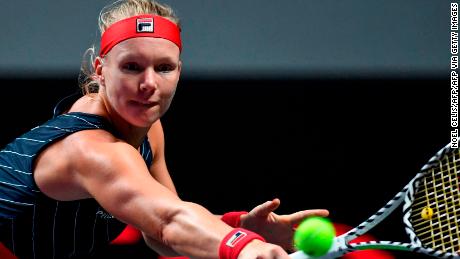 It was just two years ago that Bertens considered quitting tennis even with all the success she was enjoying. The fun had dissipated and she was increasingly weighed down. That came after a health scare when she was diagnosed with a mass on her thyroid gland. A year elaRead More – Source