Son and Kane run riot as Spurs storm to win

Memories of last season's improbable run to the Champions League final have rapidly started to fade, as just two wins in its previous 11 matches has already left Spurs 13 points adrift of Premier League leader Liverpool, out of the League Cup against fourth-tier Colchester and on the receiving end of a Champions League humiliation to Bayern Munich.But on Tuesday, Tottenham found in Red Star a team more than willing to roll over and provide the kind of revitalizing win that was sorely needed in this part of north London.For all of Spurs' intensity, crisp passing and sharp tackling — traits that have been severely lacking on this recent wretched run — Red Star was lackadaisical, sloppy and disinterested.Son Heung-Min and Harry Kane helped themselves to a brace each, with Erik Lamela getting a second-half goal his creative efforts deserved in a 5-0 win that will at least partially lift the gloom this season."It's great, exactly what we needed to do," Kane told BT Sport after the match. "We know we've been on tough run of results, it was a perfect way to respond. We're really, really pleased and hopefully we can build on this."We said we wanted to come out of the blocks, press high, play forward and of course when you score early it gives you momentum. We were clinical in front of goal and we need to be more often. To win 5-0 like we did was exactly what we needed."We've still got a long way to go, Liverpool is going to be a tough game, they've started the season in fantastic form and it's up to us to put in a performance like we did tonight," added Kane, referring to Spurs' Premier League match against Jurgen Klopp's team on Sunday.

This was unquestionably a must-win game for Tottenham — though the same was said ahead of Saturday's 1-1 draw at home to rock-bottom Watford.But the way Spurs started Tuesday's match will have no doubt brought an immediate smile to Mauricio Pochettino's face and hope that this season shouldn't be written off just yet.Inside the opening five minutes, Son and Kane each had a brilliant chance to give the home side the lead but both uncharacteristically fluffed their lines.That was just a sign of things to come in what was as one-sided a first half of football as you're likely to see. Kane did break the deadlock with his next chance, nodding home Lamela's whipped corner at the near post to the sound of 62,000 simultaneous sighs of relief.Son then helped himself to a first-half double, the first a deliciously struck half-volley and the second a cool finish at the near post. 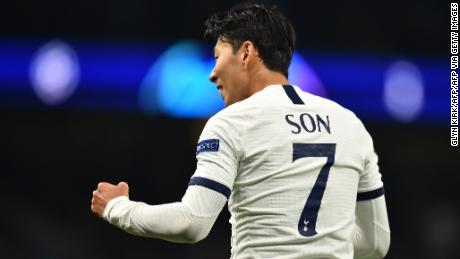 Pochettino, who in recent matches has cut a sullen figure on the touchline, appeared back to his old self, stalking his technical area and engaging in animated conversation with assistant Jesus Perez.The fans, too, were back on side following reports that Tottenham had struggling to sell-out for this match after being given the stadium's full 62,062 allocation. Red Star fans had been banned from buying tickets due to racist chanting.

But as the teams walked out, it was clear there was not a spare seat in the house. The atmosphere reached fever pitch in the second half as Lamela marked his 200th Tottenham appearance with a goal, swiveling inside the area and drilling a shot past Milan Borjan.Kane completed the rout with a sumptuous finish through the defenders legs and into the far corner."As a team we stuck together from the start, we wanted to win the game," Son told BT Sport. "We did an amazing job, an amazing performance and a big three points for us. "I don't think the goal is important but the way we plRead More – Source