City was leading 1-0 over a spirited Villa side when from a short corner Kevin de Bruyne's cross found its way into the net in the 65th minute to double its advantage.It was not immediately clear if David Silva had got the slightest of touches as the ball beat Tom Heaton, with the Villa keeper also unsighted by Raheem Sterling, who appeared to be in an offside position.A lengthy check by the Video Assistant Referee (VAR) could not definitively rule if Silva had indeed touched the ball, which would have seen the goal ruled out for offside against Sterling.READ: Has football gone too VAR?To add to the controversy, Silva had gestured to on-field referee Graham Scott that the ball had touched him, while de Bruyne told BT Sport after the match that he also believed that to be the case.Villa manager Dean Smith was less than impressed: "From what I'm led to believe it should have been disallowed because David Silva touched it and Raheem Sterling is impeding our goalkeeper, but we have to leave that to VAR," he told BBC Radio.To rub salt into the Villa wound, the Premier League later officially awarded the goal to Silva.

Later Saturday, Everton and its under-pressure manager Marco Silva also fell foul of another highly controversial VAR ruling.Dominic Calvert-Lewin had come off the bench to put the Toffees 2-1 ahead at Brighton in the 74th minute at the Amex Stadium.But six minutes later Michael Keane was ruled by VAR to have fouled Aaron Connolly for stepping on his foot to concede the softest of spot kicks.Neal Maupay slotted home the penalty before Brighton scored a last-gasp winner as Lucas Digne's own goal sunk Everton.

The in-form Sterling had given Manchester City the lead with a 46th minute strike, his 17th goal in 18 games for club and country, while Ilkay Gundogan added a clinical third against a by then deflated Villa side.But further gloss was taken off the City win when Fernandinho was sent off near the end for a second yellow card after a needless foul on Keinan Davis. 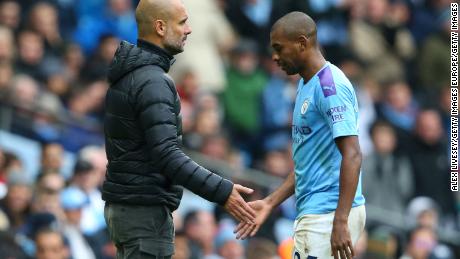 With City struggling for defensive cover his absence through a ban will hardly help the cause of Pep Guardiola's team in the title defense.

However, with its next Premier League match against Southampton, who were at the receiving end of a record 9-0 home rout by Leicester City Friday, the loss of the versatile Brazilian is unlikely to be keenly felt.Leicester's sensational victory, with Ayoze Perez and Jamie Vardy both grabbing hat-tricks, was the biggest away win in the top-flight in the history of English football.Visit CNN.com/sport for more news, videos and featuresIt also equaled the biggest margin of victory since the Premier League was formed, held by Manchester United since 1995, a 9-0 win over Ipswich Town.It briefly lifted Leicester into second place in the standings, before Manchester City's win over Villa, while Liverpool looks to extend its advantage again at home to Tottenham Hotspur Sunday.

Robert Lewandowski scored the crucial second as Bayern Munich went to the top in a tight Bundesliga title race with a 2-1 win over promoted Union Berlin.His 5Read More – Source