The game was twice temporarily halted in the first half after England debutant Tyrone Mings alerted officials to the abuse being directed at both himself and his teammates from various parts of the Levski Stadium in Sofia. As well as the monkey chanting, some Bulgarian fans made Nazi salutes during the game."His decision is a consequence of the tensions caused in recent days; an environment, which is damaging to Bulgarian football and to the Bulgarian football association," read a statement on Bulgarian Football Union's website.Mihaylov had faced pressure to resign from Bulgarian Prime Minister Boyko Borissov who later called the fans making Nazi salutes "retards" whilst arguing England had "overdramatized" the incident. "The other fans were amazing! We do not comment behavior of England`s football hooligans in Sofia," he said."We do not say they are the pride of their nation. So they need to be more humble in their statements about Bulgaria. The Bulgaria is the most tolerant nation."READ: Tammy Abraham's mother wept over racial abuse of her sonREAD:Monkey chants 'not racist,' says Inter Milan fans group

UEFA President Aleksander Čeferin blamed the "rise of nationalism" across the continent for the "unacceptable behavior" of some soccer fans who continue to racially abuse players."Believe me, UEFA is committed to doing everything it can to eliminate this disease from football. We cannot afford to be content with this; we must always strive to strengthen our resolve," he said."More broadly, the football family — everyone from administrators to players, coaches and fans — needs to work with governments and NGOs to wage war on the racists and to marginalise their abhorrent views to the fringes of society. "Football associations themselves cannot solve this problem. Governments too need to do more in this area. Only by working together in the name of decency and honour will we make progress."Later on Tuesday, European football's governing body opened disciplinary proceedings against the BFU. UEFA's proceedings listed a number of charges, including racist behavior, specifically chants and Nazi salutes. 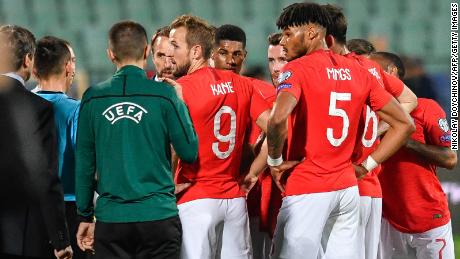 READ: How the scourge of racism continues to tarnish football

Seemingly unfazed by the ugly scenes, England won 6-0 but the result was almost the last thing on the England players' minds after the match."Feeling sorry for Bulgaria to be represented by such idiots in their stadium. Anyway. 6-0 and we go back home, at least we did our job. Safe travel to our fans, u guys did well," Raheem Sterling wrote on Twitter. Marcus Rashford, who opened the scoring with a wonderful goal, tweeted: "Not an easy situation to play in and not one which should be happening in 2019. Proud we rose above it to take three points but this needs stamping out."The players' reaction was praised by British Prime Minister Boris Johnson, who tweeted: "The vile racism we saw and heard last night has no place in football or anywhere else. Fully support Gareth Southgate & the team for rising above it. Need to see strong swift action from UEFA."Football journalist Darren Lewis told CNN Sport that Bulgaria must face "a stringent punishment" before explaining why he thought issues such as this still continue to surface."There is no black representation at the top of their [Bulgarian] game, just like there isn't at the top of UEFA. That's why so few people have any faith in their ability to actually understand this issue," Lewis told CNN World Sport.

Monday's game put UEFA's protocol in dealing with such abuse to the test and it seemed to be working when a stadium announcement told fans that racist behavior was "interfering with the game" and that if it continued, the match would be abandoned.It did continue, although less in the second half, but England refused the option to walk off the pitch with team coach Gareth Southgate twice seen speaking to his players.England's manager acknowledged that abandoning the match could have sent out the ultimate message but his players were unanimous in their decision.England fan Demi D'Cunha, who was at the stadium to watch the game, said it was initially difficult to hear the chants from his seat amongst the away supporters. "England fans were singing the whole game but once it started happening everyone was shushing each oRead More – Source