Spurs took the lead after just 48 seconds when Harry Kane headed in from Son Heung-Min's shot that had come back off the post, but Liverpool hit back in the second half through captain Jordan Henderson and Mo Salah's penalty.Liverpool was under pressure to get a result in this game after Manchester City had cut the gap at the top of the Premier League to three points with victory over Aston Villa on Saturday.A 1-1 draw with Manchester United last week remains the only blemish on Liverpool's domestic season after 10 games."There is a little bit of relief obviously, hanging on a bit, but we're delighted with the three points," said goal-scorer Henderson. "We didn't start well but I thought we were really good in the first half and we just wanted to keep the momentum going. The mentality has improved over the last few years."READ: New VAR controversy as Man City cuts gap on Liverpool

Kane became the third player to score inside the first minute at Anfield and the first since 1999 when Son's deflected shot clattered the post and fell into the path of the England captain, who headed home from the edge of the six-yard box.Shell-shocked from the early goal, it took Liverpool a while to find its way into the game but eventually chances started to come for the home side.A number of excellent saves from goalkeeper Paulo Gazzaniga, however, kept Tottenham in front at the break. The first scoring opportunity of the second half fell to Son who rounded Alisson but saw his shot rebound off the crossbar for a second time in the match.That miss proved costly as minutes later Jordan Henderson leveled for Liverpool with his first home goal since December 2015. Danny Rose failed to clear Fabinho's chip into the box and the Reds' captain scuffed a shot off his shin that bounced past Gazzaniga.Liverpool now started to sense victory and pushed hard for the lead. 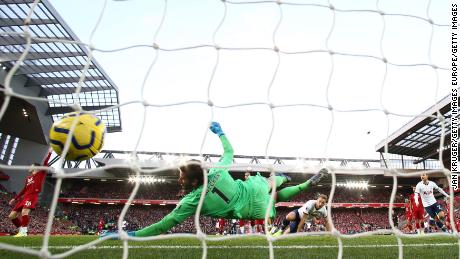 With 15 minutes to go, Serge Aurier tangled with Sadio Mane in the Tottenham box and brought down the Liverpool forward. A penalty was awarded and Mo Salah stepped up, powering his shot into the bottom-right corner.READ: LAFC ousts LA Galaxy in 'El Trafico'Rose, Son and Toby Alderweireld all had chances late on for Spurs, but Liverpool held on to move six points clear at the top of the table. DRead More – Source