In this case it was the elder superstar in Simona Halep who downed the ailing Canadian trailblazer Bianca Andreescu 3-6 7-6 (8-6) 6-3, saving a match point in the process. Halep didn't enjoy the greatest of preparation for the elite tournament due to a lingering back complaint, but it was Andreescu's back that ultimately gave way in the grueling two-and-a-half hour thriller. The earlier match in the Purple Group went into the record books, with defending champion Elina Svitolina winning the longest ever tiebreak at the WTA Finals 14-12 as part of a 7-6 (14-12) 6-4 triumph over Karolina Pliskova. The first two days in the event's new home of Shenzhen, China haven't disappointed — both matches Sunday went to a third set. Andreescu's parents hail from Romania and their daughter spent chunks of time in Romania when younger. Later, she got the chance to meet Halep, who fielded questions and gave her some advice. It was the Wimbledon champion who ultimately had the right answers on court Monday against Canada's maiden grand slam singles winner. READ: Naomi Osaka: 'I want to leave some sort of legacy'They both beat the same player, all-time great Serena Williams, in the Wimbledon and US Open finals. Svitolina, meanwhile, lost to Andreescu in Indian Wells, California in March, when the latter truly announced herself to the tennis world. Her record this year stood at 48-5 and was even better against the top 10 — a win-loss record of 8-1. All that despite withdrawing from the French Open in the first week and missing Wimbledon altogether with a troublesome right shoulder injury.Those figures seemed like getting even better when the feisty all-rounder led by a set and 6-5 in the second. She took it to Halep, especially when returning second serves, and was the aggressor for most of the first two sets.

Thinking on her feet — literally — she struck a tweener from the baseline facing the net at 2-4 in the second set and overcame a slight graze to her lower left leg that necessitated a rare medical timeout not during a changeover. One sensed it was a win for Halep just to be competing in Shenzhen after missing last year's showpiece in Singapore courtesy of the back, but she despises losing and it showed on the match point. Andreescu held the upper hand in the rally but Halep defended admirably, finally getting an unforced error from her opponent. 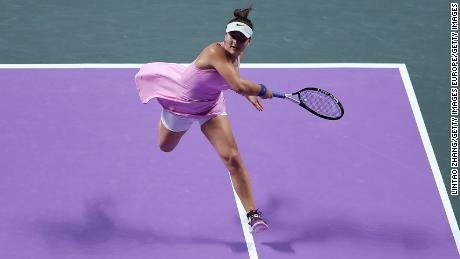 Halep only struck three unforced errors in the Wimbledon final and while that wasn't the case against Andreescu, the match point sums up her counter punching brilliance. In the tense tiebreak, Halep slapped her thigh in frustration when a set point went astray, while Andreescu bounced her racket in disgust at 6-6 after a backhand miss. After Andreescu missed a second-serve return wide to end the set, Halep smiled Read More – Source