Five goals came in the opening 20 minutes as Watford suffered another embarrassing defeat by City after last season's 6-0 thrashing in the FA Cup final.Bernardo Silva scored a hat-trick, with City's other goals coming from David Silva, Sergio Aguero, Riyad Mahrez, Nicolas Otamendi and Kevin de Bruyne.City's victory put them two points behind Liverpool, who play at Chelsea on Sunday, while Watford stay rooted to the bottom of the table on two points.READ: 19-year-old Håland scores hat-trick on Champions League debutREAD: Liverpool stunned by Napoli in Champions League

This was City's record Premier League win, as the club went one goal better than the 7-0 success against Norwich in 2013. The Premier League's biggest margin of victory is Manchester United's 9-0 win over Ipswich in 1995.De Bruyne was superb for City throughout and quickly got down to work setting up David Silva after just 52 seconds.Watford keeper Ben Foster then brought down Riyad Mahrez, allowing Aguero to convert the penalty as the Argentine scored his seventh league goal of the season. 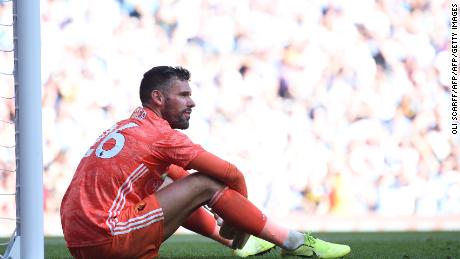 READ: Liverpool battles back against NewcastleA Mahrez free-kick hit Watford's Tom Cleverley to deflect past Foster for the third, with Otamendi setting up Bernardo Silva to make it 4-0 following a De Bruyne corner.Otamendi's 18th-minute goal ensured City now holds the Premier League record for the fastest 5-0 lead.Early in the second half, Bernardo Silva got his second, before completing his hat-trick following a De Bruyne cross. The Belgian international capped a superb performance to score City's eighth. 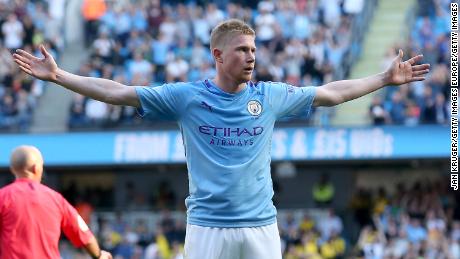