Liverpool stunned by Napoli in the Champions League

Dries Mertens' penalty and Fernando Llorente's late goal following an uncharacteristic Virgil van Dijk error consigned the Reds to a fourth successive defeat on the road in the Champions League group stages.Liverpool came into the match in fine form and with an air of invincibility, winning all five of its Premier League games so far this season and showing no signs of a Champions League hangover.But defending the European crown is not easy; only one club in the competition's history has successfully retained its Champions League title, Real Madrid on two occasions.However, Liverpool will certainly not be panicking — perhaps some will even see this as a good omen. On its way to lifting the title last season, Jurgen Klopp's side narrowly escaped the group stages despite losing all three of its matches away from home.The rest, as they say, is history.READ: Champions League LIVE — the drama as it unfoldedREAD: How football "art" helped Lille return to the big timeBut Klopp will know his side needs to improve, in particular away from home, as there are only so many magical nights it will be able to conjure up at Anfield."First half we played some good stuff," captain Jordan Henderson told BT Sport. "Just that last bit we were missing today. At home Napoli are a good side and they're going to create some chances."The mistakes for the goals we need to improve on, overall we can be better of course and we'll take responsibility and move forward."In the first half, Napoli was by far the better side and had the ball in the net early on.The Stadio San Paolo, Napoli's famed crumbling colosseum, erupted as Mertens headed home from Adrian's save, only to fall quiet after seeing the linesman's flag raised for an obvious offside.Coach Carlo Ancelotti will have been delighted with the intensity shown by his side on a sweltering night in Naples.The second half was far more even and Liverpool did eventually get a foothold in the game to begin dominating. 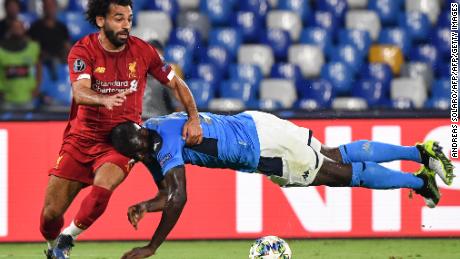 The pace of Mo Salah and Sadio Mane was also proving to be a headache for Napoli on the counterattack, with the Senegalese forward squandering a glorious opportunity to play his teammate in on goal.Alex Meret brilliantly tipped away a Salah shot, though that save was arguably bettered by one from Adrian, who somehow clawed the ball away from his goal to deny Mertens.Eventually, Napoli's breakthrough came somewhat against the run of play, as Andy Robertson dangled out a tired leg that Jose Callejon obligingly fell over.On second viewing, it looked as though the Spaniard rather jumped to the ground but VAR deemed the referee had not made a "clear and obvious error" so didn't overturn the decision."I saw it now and for me I thought it was clear and obvious not a penalty," Klopp told BT Sport. "Because CallejRead More – Source