The fifth most expensive footballer in history following his staggering $142 million move from Benfica to Atletico Madrid in July, Felix is already being compared to another Portuguese star, a certain Cristiano Ronaldo.Felix, who turned 19 in November last year, enjoyed a stellar debut season, scoring 15 goals for Benfica as well as becoming the first teenager ever to net a Europa League hat-trick.A race for his signature then ensued with Atletico securing one of the world's most talented young players. But with such a huge transfer fee comes pressure, expectation, and comparisons.And though few doubt the size of Felix's talent, the player's former coach, Bruno Lage, says comparisons with Ronaldo, Portugual's record goalscorer and five-time Balon d'Or winner, are "unfair".READ: Joao Felix: The Benfica teen who is a 'star already"It's unfair the comparisons that are made between João, who is starting his career with one of the best players of all time like Cristiano Ronaldo," Benfica coach Lage told CNN."I'd like to see João be true to himself and keep the attributes which distinguish him from the others. He doesn't have to compare himself to Ronaldo."Lage tutored João at Benfica's famed academy where Manchester City's Bernado Silva and 2016's Golden Boy award winner Renato Sanches first cut their teeth. It is a state of the art facility built 15 years ago that continues to churn out world class talent to the rest of the world.But for clubs like Benfica, such an efficient production line has its drawbacks. Unable to compete financially with the super wealthy clubs in England, Spain, Italy and France, the Portuguese champion must settle for being a 'selling' club.READ: Joao Felix: The Benfica teen who is a 'star already' 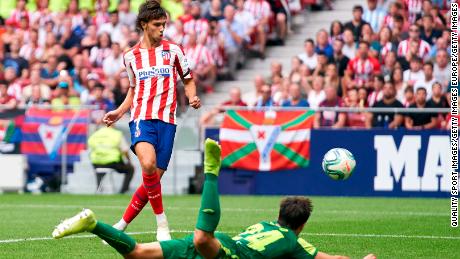 "The most important thing a club has to understand in modern times is the kind of work it has to do in order to have sporting and financial success," Lage said. "The secret for Benfica was not to copy anyone and to devise a way to have sporting success regardless of what players we sell for the good of our financial stability. Any young talent that stands out in a club is immediately transferred, because the offers are irrefutable."READ: Barcelona drawn in Champions League 'group of death'; Liverpool gets NapoliThis is why, according to Lage, "we see that in the last 10 years those who reach the quarterfinals, the semifinals [of the Champions League] are the same clubs. Because they have more money and can get the best players."It is the group of players at Lage's disposal that he hopes will carry the club to the knockout stage Read More – Source