FIFA tells Iran: Women have to be allowed into soccer stadiums

The head of football's world governing body said in a statement that FIFA's position is "clear and firm" and that women "have to be allowed" into football stadiums in the country. Iran's ban on women attending sports stadiums was put in place shortly after the 1979 Islamic Revolution. Amnesty and Human Rights Watch (HRW) have both called on football's world governing body FIFA to end the ban.CNN has reached out to the Iranian Football Federation (FFIRI) and Iranian government for comment.Infantino's call comes shortly after the death of Sahar Khodayari, a female fan who set herself on fire after she was denied access to a soccer stadium in Tehran."I am hopeful that the Iranian Federation and the Iranian authorities were receptive to our repeated calls to address this unacceptable situation," Infantino said in a statement."I contacted them several times in the recent past and so has the FIFA administration. We have a delegation of FIFA members in Iran at the moment and I am looking forward to hearing good news from them."We understand there are steps and processes that need to be taken before this is done in a proper and safe way but now is the moment to change things and FIFA is expecting positive developments starting in the next Iran home match in October." 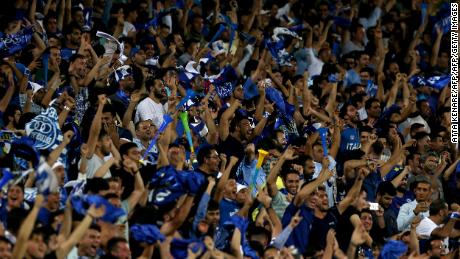 In June, FIFA sent a letter to the FFIRI, requesting a timeline that would allow women to be able to buy tickets for World Cup qualifiers, Reuters reported.Iran's men's national team takes on Cambodia in a World Cup qualifying game on October 10.Dubbed the "Blue Girl" on social media, after the colors of her favorite Iranian soccer team, Esteghlal, Khodayari, was charged with "openly committing a sinful act" by "appearing in public without a hijab" when she attempted to enter a stadium "dressed as a man" in March, according to human rights group Amnesty International.Khodayari appeared in a Tehran court earlier this month. When the case was adjourned, she poured gasoline over herself and set herself on fire. She died on Monday September 9.READ: Iranian woman denied soccer stadium access dies after setting herself on fireREAD: FIFA must act after death of Iran's 'Blue Girl', says activistIran's Judiciary has been asked to investiRead More – Source