Cyberpunk 2077 might not have been the only game starring the John Wick actor, if only Hideo Kojima had taken different advice.

Keanu Reeves appearance at Microsofts E3 conference was one of the most iconic moments in gaming this year, but it may not have happened at all if Hideo Kojima had got there first.

Kojima was at the San Diego ComicCon over the weekend, promoting his new game Death Stranding, with a focus on the character Heartman, who is being played by Drive director Nicolas Winding Refn (he occasionally also acts).

During the panel Kojima revealed that he was recommended Keanu Reeves for a role in the game, but Kojima insisted on having Mads Mikkelsen play the character of Cliff instead.

That implies that Reeves availability for video games was widely known around the industry, although other than a live action appearance in Enter The Matrix the release of Cyberpunk 2077 will be his first real involvement.

As with most things involving Death Stranding its not yet clear what role Cliff plays in the game, but Kojima did hint at a few new titbits – including some kind of online interactivity.

Youre alone playing as Sam [Norman Reedus character], youre trying to connect city to city, he said at ComicCon. I cant speak much but everyone will be playing around the world and well have indirect connections.

That sounds a bit like Dark Souls, although it seems a battle royale mode definitely isnt happening as he mused dismissively that the easiest thing to have done when leaving Konami and starting his own studio, Read More – Source 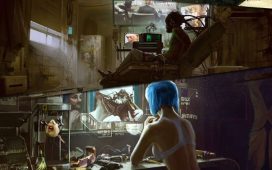