The Benromach Distillery Company Ltd is today marking a significant milestone in the distillerys history with the release of its 20th anniversary bottling.

This special whisky celebrates 20 years since production started at Benromach after the distillery was refurbished and re-opened in 1998.

Distilled in the first year of production, only 3000 bottles of this highly anticipated limited edition single malt will be available worldwide.

Matured in first fill oak casks in the traditional dunnage warehouses at the distillery in Forres, Scotland, the 20th Anniversary Bottling is part of the classic range of Speyside single malt Scotch whiskies.

This single malt whisky epitomises Benromachs classic style. It has an exceptional vintage character, with rich fruits, fresh citrus and charred oak with subtle spice and a light touch of smoke on the finish.

A beautifully written and presented hardback book accompanies the whisky and celebrates the time-honoured traditions that are employed into lovingly crafting this unique single malt Scotch whisky.

There will be 3000 bottles and 400 of these will be available for purchase at the Benromach Visitor Centre in Forres.

Keith Cruickshank, distillery manager at Benromach, who joined as a distiller in 1998 said: When we began distilling again in 1998, we wanted to recreate the unique Speyside whisky taste which historically had a touch of smoke.

The 20th Anniversary Bottling uses the finest ingredients to create a gorgeous whisky that has exceptional depth and smoothness.

This new expression gives Benromach lovers around the world the chance to own and taste a moment in time from the distillerys rich history.

Part of the Benromach classic range of single malts, this is a rare and exceptional whisky and a fitting dram to unite Benromach consumers globally to celebrate our 20th anniversary year. 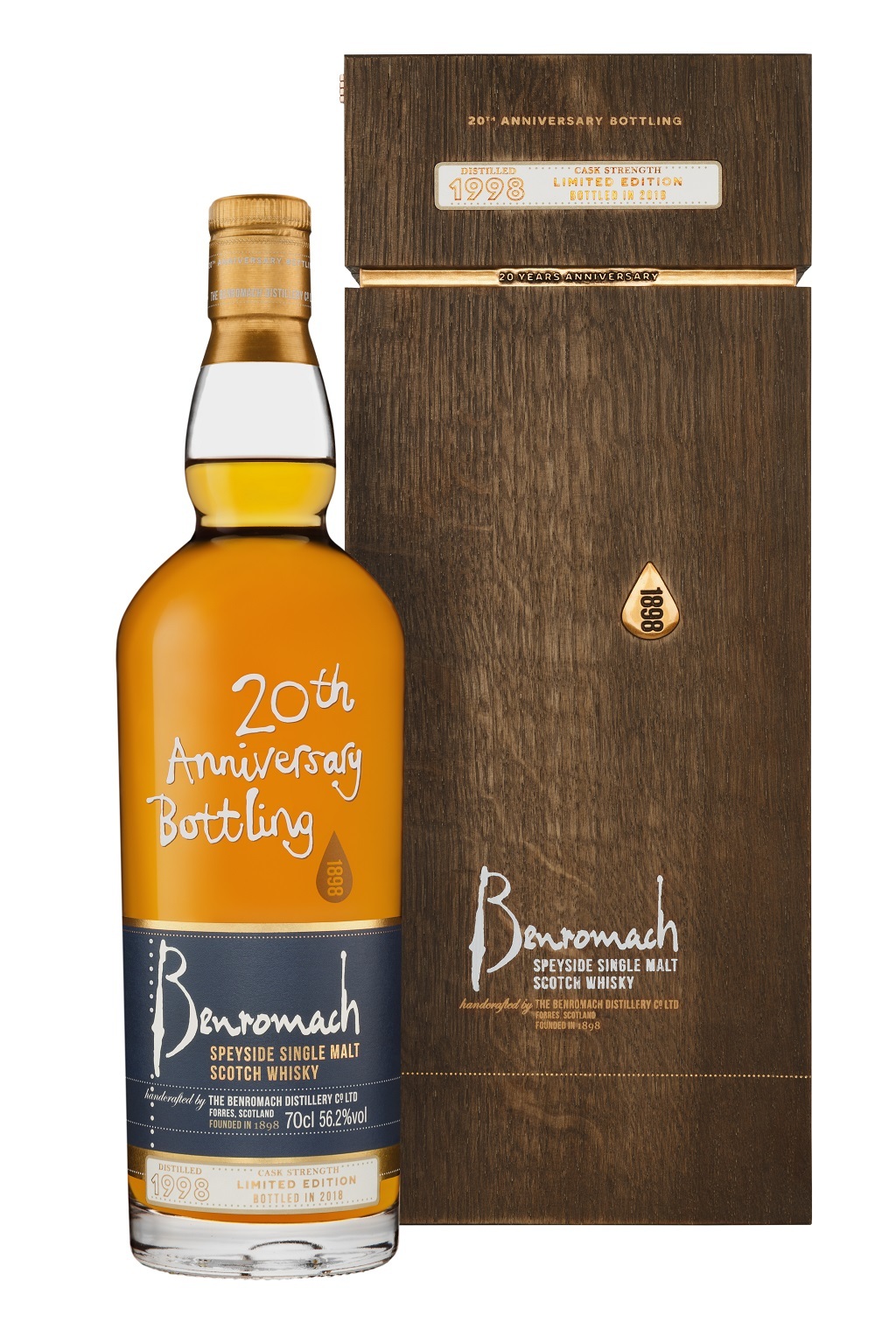 The celebratory whisky, and its presentation box

Desired by many, owned by few, the Benromach 20th Anniversary Bottling captures the classic character of Benromach Speyside single malt Scotch whisky – rich, smooth and beautifully balanced, with a hint of smoke.

This is the traditional taste, which was almost lost forever, but brought back by the distillery when it reopened in 1998. Benromach is one of only a few distilleries in Scotland to use traditional methods, without any automated machinery.

The small team of distillers employ all their senses when crafting this classic Speyside single malt Scotch whisky, managing the process by sight, sound and touch to create the unique, handcrafted and authentic Benromach taste.

The Benromach 20th Anniversary Bottling is available worldwide from today, 23 April, with a UK RRP of £299.

For more information on Benromach, and to explore the wide range of expressions available, click HERE.