At the start of December, with snow already falling across Hokkaido, resorts that have a reputation for the best powder on the planet are welcoming dedicated skiers and snowboarders from around the world.

And while those who rely on this annual influx of snow aficionados are reporting brisk business once again, the winter sports industry has seen a downturn in recent years.

In an effort to reverse that trend—and to strengthen the international allure of the nation’s slopes—the Japan Tourism Agency (JTA) is undertaking initiatives starting in December.

The projects are designed to encourage children at elementary and junior high schools to take up snow sports, and to increase the number of foreign instructors and ski tour guides working in resorts. Funds will be provided through organizations comprising of local governments, tourism associations, and operators of ski resorts across the country.

According to the JTA, the number of people who listed skiing or snowboarding as a hobby in 2015 came to 7.4 million, down significantly from a peak of 18 million in 1998.

There are many reasons for the steep decline, not least of which is an aging society. Fewer young people, shrinking disposable income, the relatively high cost of winter sports, and a wider selection of leisure activities all play a role.

The JTA’s strategy includes reaching out to winter sports fans overseas. And while the Australians long have been in the know about resorts in Hokkaido, such as Niseko, Rusutsu, Sahoro, Furano, and Asahidake, the agency wants to appeal to new markets.

A growing, wealthy middle class in China is one target, to whom the quality of the accommodations, shopping, cuisine, and cultural experiences are being emphasized alongside the impressive slopes. Meanwhile, tourism officials from Hokkaido took part in the annual Ski & Snowboard Show in London in September.

“Clearly Japan’s winter sports scene is not as extensive as [that of] North America or Europe, and it can be expensive and take time to get to Japan for anyone who does want to ski here,” said Cynthia Usui, chair of the American Chamber of Commerce in Japan (ACCJ) Tourism Industry Committee.

“But the travel industry knows that, and groups such as the Japan National Tourism Organization (JNTO) have, in recent years, become much more savvy in their marketing efforts,” she told The ACCJ Journal.

Attracting all but the wealthiest and most adventurous winter sports fans from long-haul destinations will always be a challenge, Usui said, but there is far greater potential in markets that are geographically closer. “I have heard that there is huge demand, which cannot presently be met, for Chinese-speaking ski guides in all resorts in Japan.” 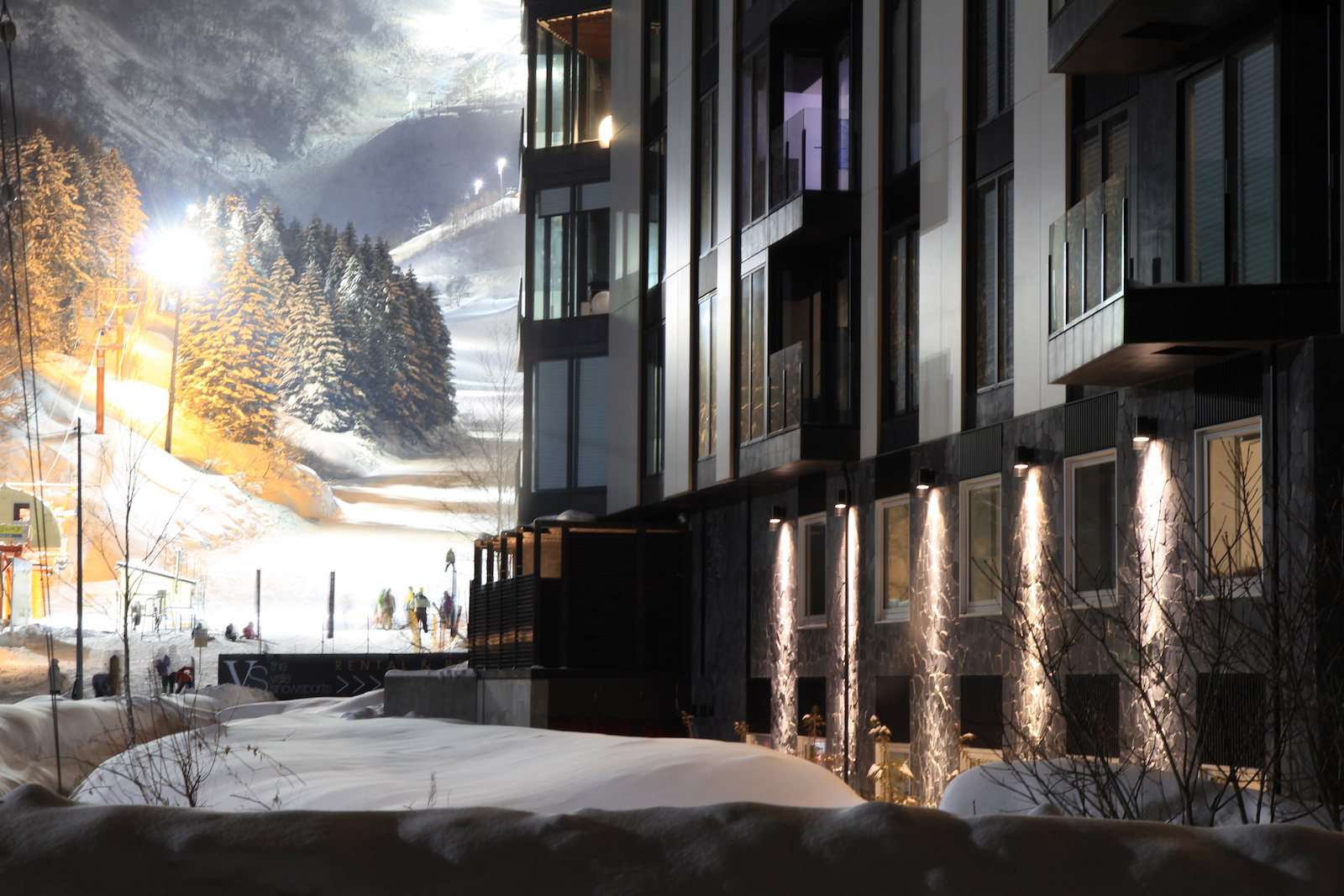 Usui believes that the JNTO’s efforts to encourage foreign visitors to get off the traditional Golden Route—Tokyo, Kyoto, and Osaka—should be supported.

“Even as recently as five years ago, Japan was not a hugely popular travel destination, but we have had double-digit growth in inbound travelers for several years now and numbers have reached the point where these visitors need to be pointed in new directions,” she said.

Eric La Cara, chief financial officer of Niseko-based Nisade, said he fervently believes that reaching out to foreign tourists will work—and is already doing so.

“Visitation from Southeast Asia is on the increase, and China has barely made a dent in the Japanese market,” he said. “China has around 600 ski resorts, which is pretty much triple the number of a decade ago, but their mountains are small—typically less than 1,000 meters high—and their snow is less than stellar.”

The local Japanese market remains critical to the company, which was founded in 2005 by a group of snow sports enthusiasts. Today it is the largest fully integrated property specialist organization in Niseko. The firm develops and manages properties in the region, and delivers hospitality and sales services from concept to completion.

Yet there are challenges.

“It’s not just in Japan, but around the world,” La Cara said. “There seems to be a bit of a decline in the winter sports sector. Japan has not seen significant economic growth over the past two decades. This and an aging population make a higher barrier to entry to skiing.

“Resorts have also suffered in the past 20 years or so because their outdated infrastructure simply cannot compete. Some are closing down, and there is a dearth of capital to help developing those properties in need of renovation and updates.”

In their heyday, there were as many as 700 winter sports resorts across Japan; but that figure has contracted sharply.

Nevertheless, La Cara is confident that Hokkaido is in prime position to lead the sector’s recovery in the years ahead.

“Hokkaido is still an undiscovered winter recreational gem that is primed for extraordinary future growth,” he said. “Recently, we have begun to see a new influx of inbound and foreign tourists, and all that is no surprise given the area’s breathtaking natural landscape, the lovely climate, the region’s culinary and entertainment pursuits, and the ease of access to some of the world’s greatest ski spots.

“That is why we believe it is appealing to do business in Hokkaido, and we see this region as one of great opportunity and future promise.”

Kjell Fornander is both an avid skier and the operator of Setsu-in, a boutique hotel in Hokkaido, where he says the conditions are ideal for him.

“I like Hokkaido because it is drier and cooler,” he said. “Most of the time, the snow is also better in Hokkaido. While the mountains in Nagano and Niigata are higher and steeper, Hokkaido has more open, Nordic-style terrain.

“And the powder can be magic.”

Setsu-in is a 260-square-meter, three-bedroom chalet that is located just minutes from Niseko-Hanazono’s base and chairlifts. Ideal for parties of six adults, it features contemporary Japanese architecture with touches of zen and tea ceremony aesthetics, together with all the modern amenities and comforts.

Fornander believes the brand, know-how, and service that Niseko has built up over the last decade will be difficult to replicate at any other ski resort in Japan in the immediate future.

Foreign investors have clearly reached the same conclusion, he points out. The entire Hanazono resort is now owned by a Hong Kong company, and a Thai company recently completed acquisition of the Kirono resort—including a Sheraton hotel.

Similarly, the Niseko Village resort is owned by a Hong Kong company and the Hilton hotel in the resort is operated by a Malaysian company, while other Malaysian and Indonesian investors are building hotels and condominiums in Hirafu.

“As long as the snow keeps falling, I think Niseko will do well. It is by far the most convenient ski resort for the Chinese and for visitors from Southeast Asia,” Fornander said. “The alternative is typically the European Alps or Whistler in Canada, which are much longer trips.”

Underlining the unanimous support within the industry for government-level initiatives to attract more overseas fans of winter sports, Toshimune Suto said bringing in more skiers from abroad would be “the most important help that the government could extend to the industry.”

Based in Hokkaido, where he is the inbound sales manager for the Ski Japan Travel Co., Ltd., Suto said Hokkaido is head and shoulders above the rest of the country when it comes to skiing—and there are a number of reasons.

“We have excellent powder snow, we have high levels of snow, and the snowfall is reliable,” he said. “We also have a long ski season, all the way from November through May, and visitors can enjoy great fresh food—especially seafood.

“Our runs are at lower altitudes, meaning that skiers can enjoy all that great powder without feeling the effects of thinner air,” he pointed out. “We also have many direct international flights, good access from Sapporo’s Chitose Airport to all the major resorts, and we have the city of Sapporo as well—the fifth largest in Japan.”

And Suto, like others with a stake in the industry, believes that the possibilities for winter sports in Hokkaido are sky-high.

Custom Media publishes The ACCJ Journal for the American Chamber of Commerce in Japan.